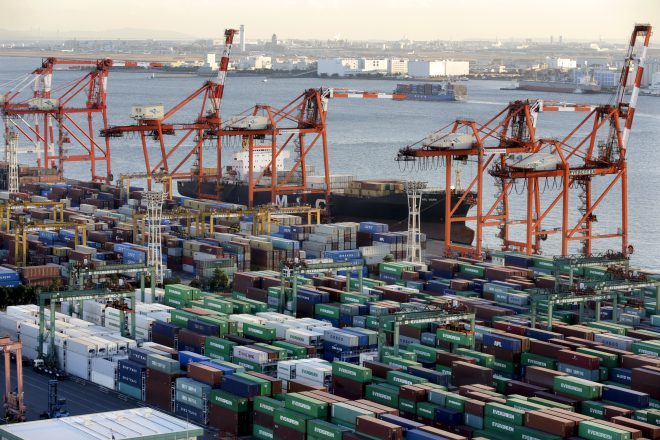 TOKYO- Japan logged a customs-cleared trade surplus of 813.4 billion yen in February, up sharply from the year-before surplus of 235.5 billion yen, the Ministry of Finance said Wednesday.
The nation’s trade balance was in the black for the first time in two months, on the back of brisk exports of automotive parts, semiconductors and other goods.
The February result marginally outpaced a median forecast of 807.2 billion yen in surplus in a Jiji Press poll of 21 research institutes.
Exports jumped 11.3 pct to 6,346.5 billion yen, led by those of automotive gear boxes to mainland China and electronic components to Hong Kong, the ministry said in a preliminary report.
Imports grew 1.2 pct to 5,533.1 billion yen, reflecting a rise in oil imports from the Middle East.
In trade with the United States, Japan’s surplus expanded 1.5 pct to 611.3 billion yen, up for the first time in three months. Exports were up 0.4 pct, led by automobile and auto parts shipments, while imports were down 0.7 pct.
US President Donald Trump has expressed his frustration with his country’s chronic trade deficit with Japan. The issue of trade imbalances may be taken up in the first session of the two countries’ new economic dialogue forum, planned for next month.
In trade with mainland China, Japan posted a surplus of 111.8 billion yen, the first black figure in five years, compared with 383.7 billion yen in deficit a year before.
While imports from China slumped 17.7 pct, exports to the Asian neighbor shot up 28.2 pct due to a sharp rebound in shipments of automotive parts and liquid crystal display products following the previous month’s plunge related to the Chinese New Year holidays. (Jiji Press)