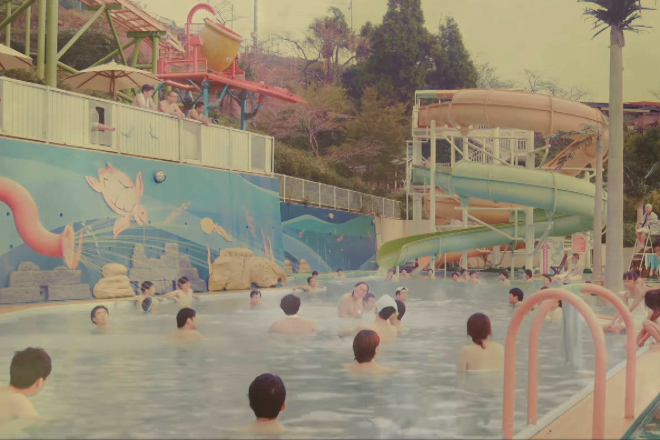 BEPPU, OITA PREF.- A unique "spa-musement park" combining hot spring with an amusement park opened on Saturday, though operating for only three days, in the famous spa resort city of Beppu in Oita Prefecture, southwestern Japan. In the park, created at Rakutenchi, an existing amusement park in Beppu, visitors wearing swimsuits with towels serving as admission tickets around their necks enjoyed various attractions, including a roller coaster covered with foam and a merry-go-round with bathtubs filled with hot spring water. Beppu is known as the largest hot spring resort in Japan in terms of water flow per minute. The temporary facility was produced based on a two-and-a-half-minute online video featuring an imaginary facility fusing hot spring with an amusement park. In the video, produced by the city and uploaded in November last year, Beppu Mayor Yasuhiro Nagano pledged to realize the spa park concept if the video was viewed more than one million times. The target figure was reached only two days after the video was posted. (Jiji Press)