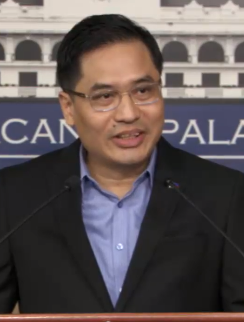 ﻿ Duterte off to Cambodia, Hong Kong, China later this week

President Rodrigo Duterte will visit Cambodia, Hong Kong and China later this week to push for economic cooperation and check the condition of the overseas Filipino workers. In a press briefing in Malacanang, Acting Foreign Affairs Spokesperson Robespierre Bolivar said Duterte will be out of the country from May 10 to 15. In Cambodia, he will participate in the World Economic Forum for ASEAN from May 10 to 11. "The organizers designated the president as an honored guest of the WEF alongside the Prime Minister of Vietnam who is currently the chair of the Asia-Pacific Economic Cooperation," Bolivar said. As ASEAN chair, he said, "the president is expected to share his views on the region’s achievements and challenges, and to deliver a message to the youth of ASEAN." He said Duterte has also been given the opportunity to address international investors regarding his economic plan. More than 700 leaders from business, government, civil society, and the media are expected to participate in the WEF. After Cambodia, Duterte will fly to Hong Kong where he is set to meet with the Filipino community, Bolivar said. Curiously, the president's only official schedule in Hong Kong is his meeting with the Filipinos there while he will be in the Special Administrative Region from May 11 to 13. Duterte will proceed to Beijing on May 13 to join other 27 heads of state and government for the Belt and Road Forum for International Cooperation, which is scheduled to take place on May 14 and 15. Bolivar said the Department of Foreign Affairs is trying to work for a bilateral meeting between Duterte and Chinese President Xi Jinping. Asked if the South China Sea issue could be part of the agenda if case the two leaders' meeting would push through, he said, "We cannot preempt what the President will raise. But definitely issues that are critical to our national interest. "But since this is primarily an economic forum, so we would expect that if such a meeting would take place, the President would probably be discussing economic cooperation with China." The Philippines and China are among the claimant countries in the South China Sea. (Celerina Monte/DMS)