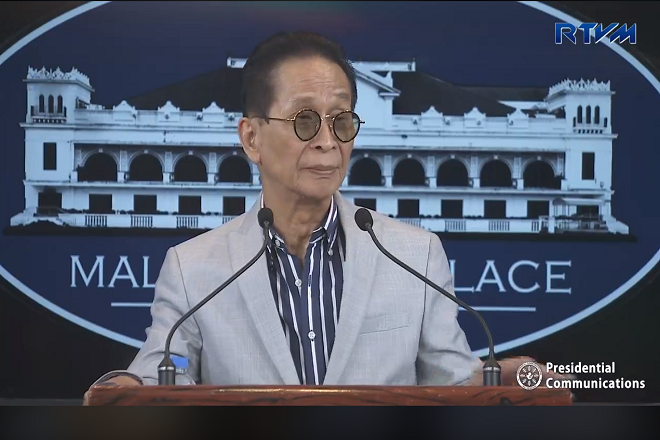 Palace ”doing everything” to bring back 538 Filipinos in cruise ship

Malacanang on Monday said they are doing everything to help pver 500 Filipino crew members and passengers aboard a cruise ship docked off Yokohama which  has confirmed cases of the 2019 novel corona virus ( COVID-2019).

“We are doing everything to bring them back. There are protocols and it’s not easy (to repatriate) but we are doing are thing,” Presidential Spokesperson Salvador Panelo said in a press briefing.

According to the Department of Foreign Affairs (DFA), sixteen new confirmed cases were added to the previous 11 that were reported as having COVID-19.

As of Monday, there are 538 Filipinos aboard the Diamond Princess that is under quarantine. Of the 538, 531 were crew members and 7 were guest passengers.

In a separate briefing at Malacanang, DFA Assistant Secretary Eduardo Meñez said those positive of COVID-19 were brought to hospital for better care.

“The embassy is in close coordination with Philippine and Japanese government agencies and representative of World Health Organization (WHO), Princess Cruises and the manning agencies to ensure the needs of the crew and passengers are met and to facilitate their eventual return to the Philippines,” Meñez said.

Meñez said the technical working group of the Interagency Task Force (IATF) will have a meeting today to come up with a recommendation for the repatriation of the Filipinos aboard the ship.

“The recommendation will be given to full IATF meeting tomorrow. But of course, nothing will move without the clearances of the Japanese government. Most of the people that we have are crew members so we will await for the recommendation of TWG who have more specific details with regards to conditions and maybe labor requirements or immigration requirements before they can be sent home,” he said.

The 14-day quarantine period of those aboard the cruise ship will end on February 19.

Meñez said they can only take action after the 14-day period and everyone needs to be cleared before they return to the Philippines.

The assistant secretary assured that all affected Filipinos will be assisted.

“The Philippine embassy, as I said, is in constant contact [with them]. We have, through the Japanese government, delivered care packages containing toiletries and non-medical supplies, and are in constant contact with the medical authorities,” he said.

Though it is not yet clear who is paying for the medical expenses of the patients, Meñez said the government will pay if need arises.

“At this point, it is not clear to me whether the medical expenses of those positive, of those identified to be COVID-positive are being shouldered by whom. I would imagine that in the initial case, it would be the Japanese government. But the employer as well will probably have some responsiblity for paying for the medical expenses. But if in the final analysis, the government needs to pay, the government will step up accordingly,” he said. Ella Dionisio/DMS