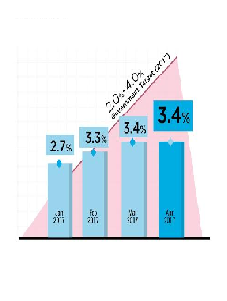 Inflation remains at 3.4% in April

Slower price adjustments in electricity and gas and slightly higher prices of food commodities kept inflation at the same rate as with the previous month at 3.4 percent in April, according to the National Economic and Development Authority (NEDA). But NEDA Officer-in-Charge and Undersecretary for Investment Programming Rolando G. Tungpalan raised some concerns, which could increase prices of some commodities, such as rice, in the coming months. He said inflation rate in April is slightly below the median market expectation of 3.5 percent and remains within the government’s target of 2.0 to 4.0 percent for 2017. “The stable inflation rate in April is a respite from the upward inflation trend we saw in the first three months of the year. Nevertheless, volatilities in oil prices and erratic exchange rates can still manifest into higher domestic prices for both food and non-food commodities,” the NEDA official said. Inflation in the non-food group decelerated from 2.8 percent in March to 2.7 percent in April 2017. Slower inflation in this group can be attributed to the sluggish price adjustments of electricity, gas, and other fuels. This can be traced to the resumed operations of the Malampaya Gas Field after a two-month maintenance shutdown from January to February. Lower pump prices recorded for unleaded gasoline, diesel, kerosene, and LPG in April contributed to slower non-food inflation. Meanwhile, inflation in the food and non-alcoholic beverage group accelerated from 4.0 percent in March to 4.2 percent in April. But partially tempering the increase in food inflation were fruits, vegetables, sugar, jam, honey, chocolate, and confectionery. Prices of staples such as rice, meat, and fish remained high due to supply constraints. Data from the Philippine Statistics Authority (PSA) showed the country’s declining inventory of commercial and National Food Authority (NFA) rice. Agriculture Secretary Emmanuel Pinol earlier said that there was no need in the meantime to import rice because of the expected bountiful harvest. “With the potential recurrence of El Niňo, the government should start taking precautionary actions to mitigate the damaging effects of droughts and dry spells. These include production support, distribution of seeds, and timely importation,” Tungpalan said. “Possible increases in transportation fares and electricity rates in the coming months could also exert upward pressure on prices, along with the transitory impact of the proposed tax reform program,” he added. Tungpalan also urged the government to prioritize discussions on rice tariffication, in order to avoid creating policy uncertainties. “Additional interventions should also be taken to address those who will be negatively affected by the expected increase of rice imports,” he said. Tungpalan is OIC of NEDA while Socioeconomic Planning Secretary Ernesto M. Pernia is on official travel in Yokohama, Japan. DMS