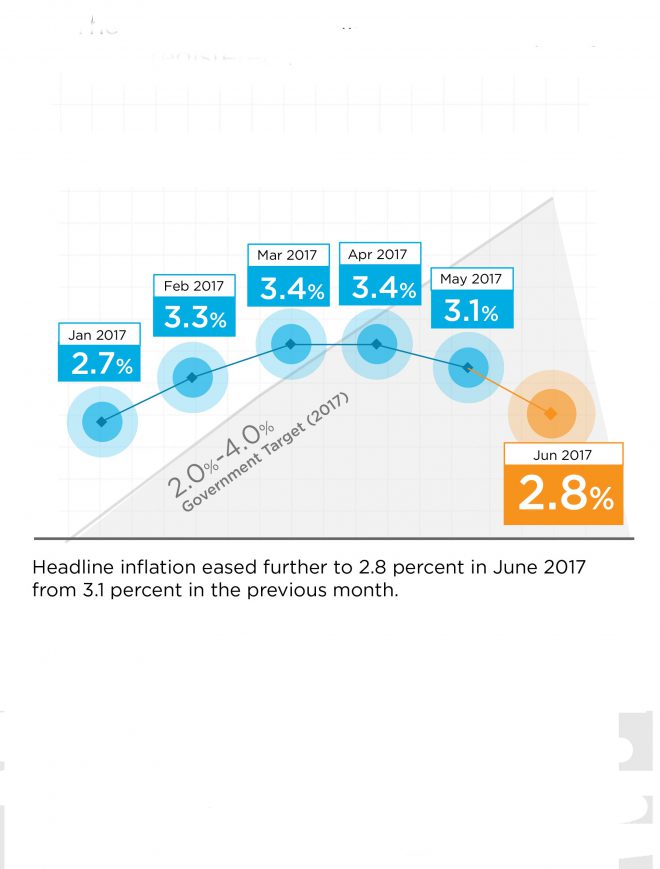 The inflation rate in June slowed down to 2.8 percent from 3.1 in May due to slower price adjustments in food and non-food commodities, the Philippine Statistics Agency said Wednesday. The National Economic and Development Authority (NEDA) projects the moderate inflation rate registered in the first six months of 2017 to continue for the rest of the year. But the central bank, in a statement, said: “It should be noted however that June CPI figures were adjusted to exclude Lanao del Sur.” New central bank governor Nestor Espenilla Jr said  while the latest figure was expected, it will” continue to closely monitor evolving price conditions in line with the Bangko Sentral ng Pilipinas’ commitment to ensure price stability conducive to a balanced and sustainable economic growth.” NEDA Officer-in-Charge (OIC) and Undersecretary for Policy and Planning Rosemarie Edillon said keeping inflation stable strengthens prospects of stronger domestic economic activity in the near-term. “The significant decline in the probability of extreme weather disturbances due to El Niňo and La Niňa until the end of 2017 bodes well for agricultural production and commodity prices moving forward,” Edillon said. June inflation is lower than market expectations of 3 percent, and within the government’s target of 2–4 percent. Core inflation, which excludes select volatile food and energy prices, also eased to 2.6 percent in June 2017 from 2.9 percent, reflecting the general price stability across goods and services. Also, slower price adjustments in both food and non-food commodities contributed to the easing of inflation in June 2017. For food and non-alcoholic beverages, inflation slowed to 3.5 percent in June from 3.8 percent the previous month. Non-food inflation slowed to 2 percent in June 2017 from 2.5 percent in May. This follows significantly slower year-on-year increase in domestic petrol prices during the period, particularly unleaded gasoline (5.1 percent from 9.9 percent), diesel (5.3 percent from 13.6 percent), and kerosene (3.0 percent from 9.6 percent). Edillon said government should take advantage of good weather conditions to accelerate the implementation of climate change adaptation measures. “Among the crucial ones are investing in infrastructure like catchment basins, advance atmospheric moisture extraction, and promoting water-saving technology. Rehabilitation of damaged irrigation systems and periodic maintenance will also ensure disaster and climate resiliency of the agriculture sector,” she said. Edillon said possible risks still have to be considered. "On the external front, domestic prices may be affected as global financial market conditions adjust in response to the faster monetary policy normalization in the United States,” Edillon said. She added domestically, the transitory impact of the proposed Comprehensive Tax Reform Program (CTRP) could push up inflation once implemented. “We find it critical to have social safety nets to mitigate the short-run effects of the tax reform program. Nevertheless, the government needs to communicate well to the public the CTRP’s benefits especially in terms of productivity improvements which, in effect, will eventually result in lower inflation,” she said. DMS