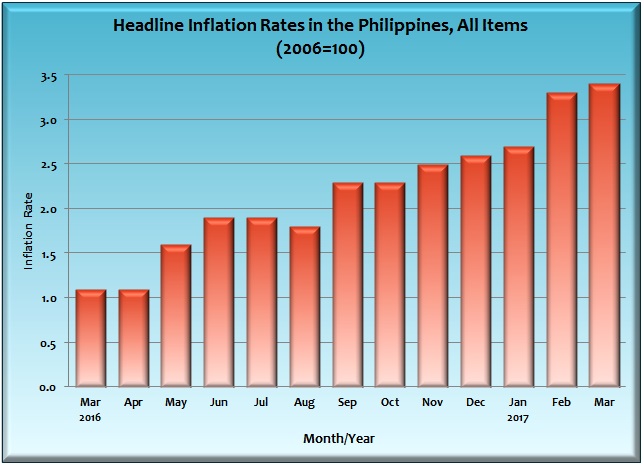 Philippine inflation rose to 3.4 percent in March due to higher prices of electricity, gas and other fuel, the Philippine Statistics Authority said Wednesday. This is higher than 3.3 percent in February and the highest since 3.7 percent in November 2014, but the National Economic and Development Authority (NEDA) said    “it is  still within government’s target for the year and the median market expectation of 3.4 percent for the month.” “Upward risks to inflation remain, but the overall outlook continues to be within government’s 2.0-4.0 percent target range for this year and next,” said Socioeconomic Planning Secretary Ernesto Pernia in a statement. Inflation in the non-food group accelerated to 2.8 percent from 2.5 percent and from 0.4 percent in March 2016. This was mainly due to the faster year-on-year price adjustments of electricity, gas, and other fuels, which hiked to 9.3 percent, NEDA said. The oil price hike was partly caused by a 20-day maintenance shutdown in the Malampaya Gas Field, shutting down three power plants—Ilijan, Sta. Rita, and San Lorenzo. The shift to liquid fuel from natural gas pushed up household electricity rate to P9.67 per kWh, it added. “Higher electricity rates are expected to persist in the next two months as the Energy Regulation Commission (ERC) will spread the additional cost from the use of liquid fuel, which is more expensive than natural gas, until May 2017,” Pernia said. Other sub-commodity groups that pushed inflation of non-food items upwards were furnishing, household equipment, and routine maintenance of the house at 2.5 percent from 2.3 percent, and health at 2.8 percent from 2.6 percent. Inflation in the food group decelerated to 4.2 percent in March 2017 from 4.3 percent in the previous month. This is due to slower price adjustments in fish, fruits, vegetables, sugar, jam, honey, chocolate, and confectionery, and other food products. Price increases in rice and meat accelerated to 2.3 percent and 3.2 percent, respectively. Both could be due to importation constraints imposed by the government. “Inflationary pressure may ease following the removal of quantitative restrictions (QR) on rice importation, and the timely augmentation of supplies. However, the likely recovery of international and petroleum prices in 2017 may keep consumer prices afloat,” Pernia said. He added possible adjustments in transportation fares and electricity rates in the coming months could exert upward pressure on prices. Continued depreciation of the Philippine peso against the US dollar may exert upward push on the cost of basic commodities and services, Pernia said. “The recent upward trend in inflation needs to be closely monitored. The government needs to implement timely mitigating measures to ensure that prices remain stable,” said Pernia. DMS