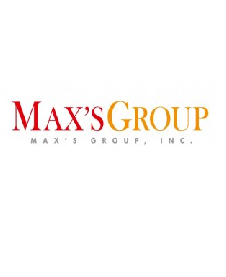 Max’s Group Inc. systemwide sales rose 10 percent to P3.93 billion for first quarter 2017 from P3.58 billion for first quarter 2016. Topline growth came in at nine percent to P2.91 billion from P2.68 billion as of  March 31 2016. Restaurant sales increased four percent to P2.42 billion from P2.32 billion driven by new store openings and stable same store sales performance. Commissary sales grew 40 percent to P311.44 million from P222.16 million owing to additional franchised outlets. Meanwhile,  revenues from new franchises, royalty and continuing license fees was up 34 percent to P180.12 million compared to P134.37 million for first quarter 2016 mainly due to a larger recurring income base. Cost of sales improved to 76.1 percent from January to March 2017 as opposed to 76.3 percent from January to March 2016. The company withstood the effects of higher input prices and distribution expenses. As a result, earnings before interest, taxes, depreciation and amortization (EBITDA) stood at P350.94 million resulting to a net income of P175.98 million, up eight percent versus P162.32 million year-on-year. “We are off to a relatively solid start for the year notwithstanding the challenging commodity pricing situation. While we expect to encounter some more of these headwinds, we will continue to push forward with our strategies,” said Robert Trota, president and chief executive officer of Max’s Group, Inc For the quarter, Max’s Group opened 18 new stores including three branches abroad among which are Yellow Cab Pizza in Qatar and Hawaii as well as Max’s Restaurant in San Diego, summing its total network count to 632 outlets with 51 located overseas. The company plans to rollout around 60-70 stores for 2017. On the international front, Max’s Group Inc was able to secure its first development agreement for the year, with a commitment to establish 10 Yellow Cab Pizza stores in Brunei and 5 Yellow Cab Pizza stores in East Malaysia over the next 5 years. “Our objective is to bulk up and at the same time operationalize our existing pipeline,” stated Peter King, chief executive officer of Max’s Group International. DMS