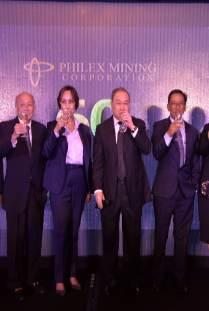 The board of directors of Philex Mining Corp. Thursday announced a core net income of P458 million for the first quarter, 18 percent higher than  year-ago figures of P389 million. The improvement was attributed to higher metal prices, partly offset by lower metal output, Philex said in a disclosure to the Philippine Stock Exchange. Philex initiated measures to improve metal recovery, by enhancing  flotation process to offset the lower milling tonnage. The metal recovery rate for copper increased to 84 percent compared to year-ago levels of  81 percent) as grades improved to 0.209 percent from year-ago levels of  0.204 percent. Recovery rate for gold rose to 83 percent  from year-ago levels of 80 percent) while grades improved to 0.421 grams per tonne  from 0.405 g/t during the first quarter of 2016. As a result, the first quarter 2017 tonnage yielded 7.752 million pounds of copper from  8.425 million pounds last year and 22,451 ounces of gold from 24,200 ounces in the same period in 2016. Consolidated revenues amounted to P2.542 billion (1Q2016: P2.390 billion), due to improved metal prices and favorable exchange rates, partly offset by lower metal output. Average realized copper prices reached $2.77 per pound  from first quarter 2016 prices of  P2.25 per pound while average realized gold prices rose to $1,264 per ounce from $1,239 per ounce during the same period last year. The realized foreign exchange rate of $50.32 to one peso compared with $46.90 to one peso in the same period last year made a positive contribution. Revenue from copper went up to P1.094 billion  from P946 million in the first quarter of 2016 while revenue from gold was flat at P1.426 billion. Revenues from silver rose to P21.9 million from P16.8 million during the same period in 2016 as average realized price went up to $18 per ounce from  $15 per ounce. DMS