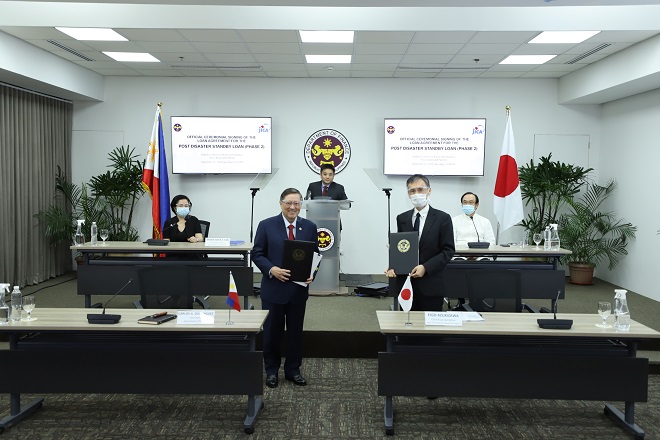 The Philippines and Japan signed Tuesday an agreement for a 50-billion yen standby loan that aims to quickly disburse Japanese funding support to the Philippine government’s post-disaster response efforts in the event of a national calamity or health emergency.

In the case of the current COVID-19 pandemic or any other public health emergencies, the imposition of an enhanced community quarantine (ECQ) or its equivalent in the National Capital Region (NCR) or in any other highly urbanized area in the country will also trigger the disbursement of the loan.

“The ongoing pandemic underscores the need to further improve our policy and institutional framework for disaster risk reduction and management. It likewise emphasizes the need to build our financial resilience against disasters and similar emergencies. The ability to mobilize financial resources without delay is essential to emergency preparedness.,” Secretary Dominguez said during the ceremonial signing of the loan agreement at the Department of Finance office (DOF) in Manila.

Equivalent to about P23.3 billion, the PDSL 2 will be available for quick disbursement in tranches within three years, once the loan is declared effective, and may be extended for an additional three-year period for up to four times.

“Again, we express our heartfelt gratitude to the people and the Government of Japan, represented here today by His Excellency Ambassador Haneda and by JICA Chief Representative Eigo Azukizawa. This loan package is an added testament to the treasured solidarity between our countries,” Secretary Dominguez also said.

Ambassador Haneda said that “as a calamity prone country like the Philippines, Japan fully understands the value of safeguarding lives, infrastructure and livelihood.”

“Filipinos can count on Japan to remain responsive to the call of times as a true friend closer than a brother. What we have persistently build together during the time of Prime Minister Abe, we will continue to sustain under Japan's new leadership. With the utmost support of everyone, we will bring Japan-Philippines partnership on to the next level,” Ambassador Haneda added.

Last July 1, the Philippines and Japan also signed an agreement for a separate 50-billion yen loan for the COVID-19 Crisis Response Emergency Support Loan (CCRESL), which aims to assist the government’s efforts to contain the spread of the coronavirus pandemic and provide economic relief to Filipinos most affected by this global crisis.

The CCRESL was processed by the approving authorities from the time it was approved by the Development Budget Coordination Committee (DBCC) last June 10 in only 14 working days until the loan accord signing on July 1.

The PDSL 2 was processed at an even faster pace. From the DBCC approval last Sept. 10, it was processed in only 2 working days until today’s signing of the agreement, which is by far the fastest loan secured by the Philippines from Japan through Official Development Assistance (ODA) financing.

The financing package under PDSL, which carries a fixed interest rate of 0.01 percent, will form part of the Philippines’ “financial war chest” for future emergencies, Secretary Dominguez said.

“Of course, we hope we will never need to quickly disburse from this loan package. But its availability assures us that we will have ample ammunition to support our budgetary needs in the event a crisis happens. This facility is an important element in our overall resilience,” he said.

The maturity period of the PDSL 2 is 40 years, inclusive of a 10-year grace period.

Secretary Dominguez pointed out that the loan’s highly concessional terms underscore “the abiding trust between Japan and the Philippines.”

“I thank the team that worked tirelessly to finalize this loan agreement. You have all once again worked with diligence and speed. For all those involved in the negotiations, this is quite a heroic effort,” he said.

The PDSL 2 was extended by Japan in recognition of the Philippines’ plans and accomplishments in the following reform areas: 1) policy and institutional framework for disaster risk reduction and management; 2) financial resilience to natural disasters and climate change; and 3) public health emergency preparedness.