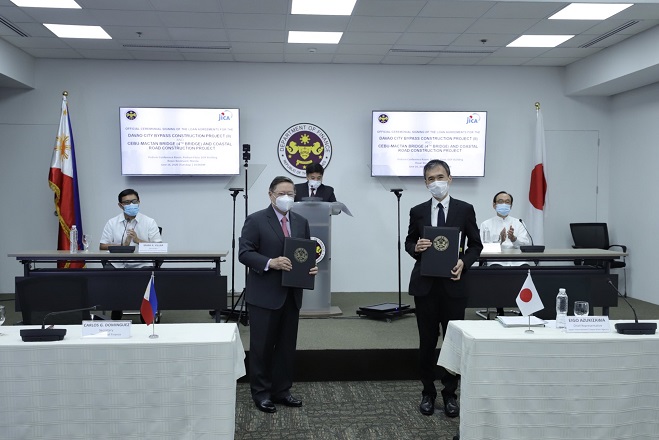 The Philippines and Japan signed Tuesday two loan agreements worth a combined P75.5 billion (about 154 billion yen) for two big-ticket projects in the Visayas and Mindanao under the “Build, Build, Build” infrastructure program, as the Duterte administration ramps up its  infrastructure investments to let the country recover quickly from the coronavirus-induced global economic crisis

“We express our heartfelt gratitude to the people and the Government of Japan, represented today by the officials of JICA and of course, by His Excellency, the Ambassador of Japan to the Philippines, for their generosity and earnestness in supporting our infrastructure modernization program. Given the challenging circumstances, these projects bring more support to our economic recovery well beyond their nominal value,” Secretary Dominguez said after the signing of the loan agreements held at the Department of Finance (DOF) office in Manila

“In a broader sense, I hope that these projects will also contribute to the economic recovery of the country amidst the COVID-19 pandemic as we fully support your government's pronouncement that restarting and accelerating the 'Build, Build, Build' program should be one of many strategies for reviving the Philippine economy,” Mr. Azukizawa said

The Cebu-Mactan Fourth Bridge and the Coastal Road Construction project is the biggest infrastructure project in the Visayas under the “Build, Build, Build” program with a total estimated cost of P76.4 billion (about US$1.59 billion or JPY168.96 billion

JICA has committed to fund 75 percent of the total cost of the project through Official Development Assistance (ODA) financing, while the remaining 25 percent or P18.82 billion (about US$442.76 million or JPY49.73 billion) will be covered by local financing.

This project aims to improve the capacity of the existing road network connecting mainland Cebu and Mactan Island, to facilitate the faster movement of trade and people between the two areas

The bridge component will be built using the steel box girder-with-orthotropic steel deck method, known for being the most innovative and shortest period of bridge construction

This will also allow the future expansion of the 4-lane bridge to 6 lanes.

On top of the loan, JICA will also finance the detailed engineering design for the project, which is expected to start groundwork in 2021 and be completed in 2029.

The Davao City Bypass Construction project, meanwhile, is expected to reduce congestion in Davao City and improve accessibility to its major development hubs through the construction of a 45.5-km, four-lane bypass road

It also includes a 2.3-km main tunnel, which will utilize advanced Japanese technologies for its construction, and 0.5-km 4-lane cut-and-cover tunnel section running through the mountainous terrain in Barangay Magtuod, Davao City.

Stretching from the Davao-Digos intersection of the Pan Philippine Highway at Toril, Davao City to the Davao-Agusan National Highway in Panabo City, the project is expected to reduce travel time between the two points from the current one hour and 44 minutes--using the existing Maharlika Highway--to only 49 minutes

The P18.5-billion loan agreement signed today for the project is supplemental to the loan accord worth P9.27 billion (JPY23.9 billion) signed in 2015.