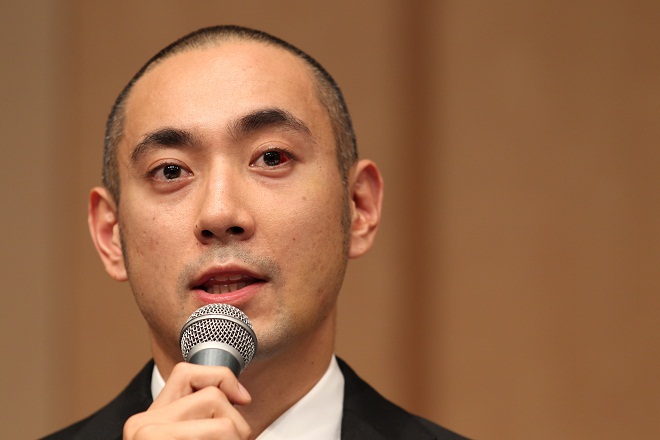 Ebizo to assume prestigious Kabuki name Danjuro in May 2020

Tokyo--Kabuki actor Ichikawa Ebizo, 41, will become Ichikawa Danjuro XIII in May next year, marking the revival of the big name in the traditional Japanese performing art for the first time in seven years, kabuki promoter Shochiku Co. <9601> said Monday.

Ebizo will assume the stage name Ichikawa Danjuro Hakuen and conduct performances to publicize the name succession at the Kabukiza Theater in Tokyo in May-July next year together with his first son, Kangen Horikoshi, 5, who will be Ichikawa Shinnosuke VIII.

"I'll devote my entire life to kabuki," Ebizo told a press conference at the theater.

The eldest son of Danjuro XII, who died in 2013, became Shinnosuke VII in 1985 and Ebizo XI in 2004. He has been also playing roles in movies and television dramas. He lost his wife, freelance television announcer Mao Kobayashi, to cancer in 2017.

The prestigious name Danjuro traces back to the 17th century. Danjuro V adopted Hakuen, meaning a white ape, as his pen name for writing poetry.

Ebizo said he decided to use the same pen name because he is inferior to his father and grandfather as are monkeys to humans and finds it necessary to make efforts further.

The kabuki shows to announce the Danjuro name succession will also be held in other major cities, including Fukuoka, Osaka, Nagoya and Kyoto, in 2020-2021. Jiji Press