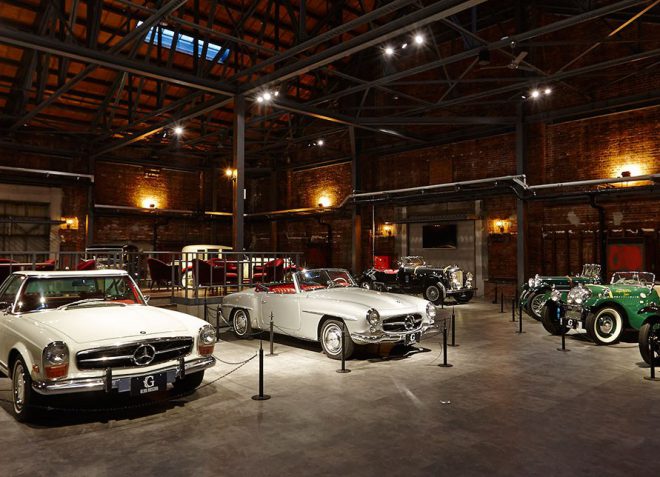 KOBE- A nearly century-old red brick warehouse in the major western Japanese city of Osaka has turned into a mecca for enthusiasts of vintage and classic cars in Japan, enabling visitors to get up close to pieces of motoring history. Glion Museum on the port of Osaka displays more than 100 heritage vehicles ranging from the Rolls-Royce Phantom II, the British carmaker's 40/50 horsepower model released in 1929, to late 20th century supercars, all iconic in their own way. The museum, which is designed to make visitors feel as if they are strolling through the back streets of London or New York, was opened by Glion, a retailer of imported cars in nearby Kobe, in June 2015. It occupies some 10,000 square meters, and includes a steakhouse and cafe. Examples from approximately 100 years of motoring history, from the early 1900s when gasoline-powered vehicles became prevalent to the present age, are exhibited in four sections laid out in chronological order. Technical information and data is available alongside the cars, with videos of the vehicles on the road in which their distinctive engine notes can be heard accompanying the museum pieces. Separating the Glion Museum from similar displays is the fact that all cars are roadworthy, and for sale. "Classic cars are considered expensive but there are some priced at just 2 million yen," Jun Uehara, 36, event director at the museum, said.  Every Saturday and Sunday, 200 to 300 people visit the museum, Uehara said, adding about 150 vintage cars have been sold since its opening. "We want lots of people to get a feel for automobile history here and become interested in it," he said. The museum is "worth visiting as there are many cars I longed for when I was young as well as older cars I don't know," said Shinya Sagisaka, a 56-year-old, who came with his wife from Izumisano in Osaka. "It takes me back to my childhood." The Rolls-Royce Phantom II was produced between 1929 and 1935 and the example on display in Osaka is one of the rarest. Cars on display also include the Ford Model T, the world's first mass-produced car released in 1908, and many iconic Japanese cars such as the sleek Toyota 2000GT and groundbreaking Nissan Skyline GT-R. Toyota Motor Corp. manufactured only 336 units of the 2000GT sports car between 1967 and 1970 and it has become one of the world's most highly sought-after vintage cars. The brick warehouse was built by Sumitomo Warehouse Co. in 1923 and was taken over by the Osaka municipal government in 1999. It was closed in 2006 out of concern about its quake resistance.  The Glion Group then leased and reopened the warehouse by making it more quake-resistant. "We display valuable cars in a valuable warehouse," Uehara said.  "Many brick lovers visit here, not to mention car enthusiasts." The museum opens from 10 a.m. to 10 p.m. every day except Monday. (Ryutaro Hara, Kyodo News)