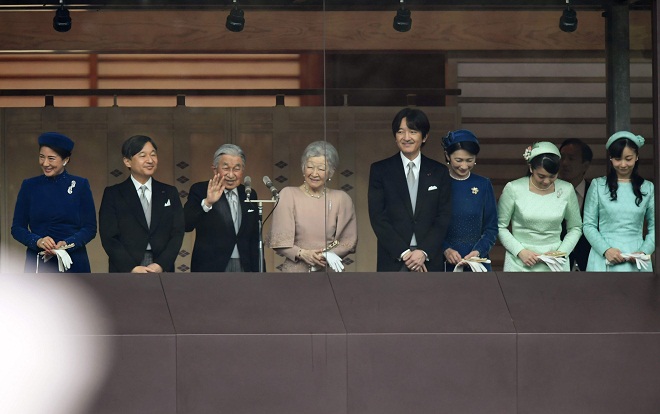 Tokyo--Japanese Emperor Akihito broke Imperial custom by living together with his young children to create a loving family.

At a 1984 press conference marking the 25th anniversary of his marriage with Empress Michiko, who was the first commoner to marry into the Imperial Family, the Emperor, then Crown Prince, said that he was able to understand the feelings of other people by properly understanding the feelings of his own family.

As the future successor to the Chrysanthemum Throne, the Emperor lived separately from his own parents.

After the birth of his first child, now Crown Prince Naruhito, then Crown Prince Akihito was able to realize his hopes of creating a family who lived together.

His own father, Emperor Hirohito, known posthumously as Emperor Showa, and Empress Nagako, or Empress Kojun, also wished to live with their children, but were unable to break with established Imperial custom.

Then Crown Prince Akihito has said that he used a relaxed child-rearing policy for his first son but a stricter one for his second son, current Prince Akishino.

Then Crown Princess Michiko prepared boxed lunches for her children at the Imperial residence's kitchen.

During a press conference in the year when his first daughter, then Princess Sayako, now Sayako Kuroda, was born, the then Crown Prince referred to her future departure from the Imperial Family after marriage. He expressed his intention to provide the princess with education useful for her when she left the Imperial Family to become a commoner, as well as Imperial education on social welfare.

Asked about his family ahead of his 66th birthday in 1999, the Emperor said in a written answer, "My home has been the haven that gave me peace of mind and the place which has provided me with new energy to carry out my duties."

In October 1993, Empress Michiko collapsed at her residence of Akasaka Palace on her 59th birthday and became unable to speak due to anxiety about weekly magazine reports criticizing her.

With support from the Emperor and her daughter, then Princess Sayako, the Empress was able to recover her health.

Looking back at that time, the Empress told a press conference in June 1994 about her worries and sadness growing day by day, saying that she was close to losing hope for recovery.

In November 2005, Princess Sayako married Yoshiki Kuroda, a worker at the Tokyo metropolitan government, and left the Imperial Family.

At "Choken-no-Gi," a ceremony of audience held at the Imperial Palace three days before her wedding, Princess Sayako expressed her gratitude to the Imperial couple for rearing her with tender love for a long period of time.

In response, the Emperor said that he deeply appreciated her for fulfilling her duties as princess and for supporting family members.

Marking the 50th anniversary of his marriage in 2009, the Emperor, who cherishes his family bonds, visited Kodomonokuni, a natural park in Yokohama, south of Tokyo, and boarded a miniature steam locomotive with his children and grandchildren.