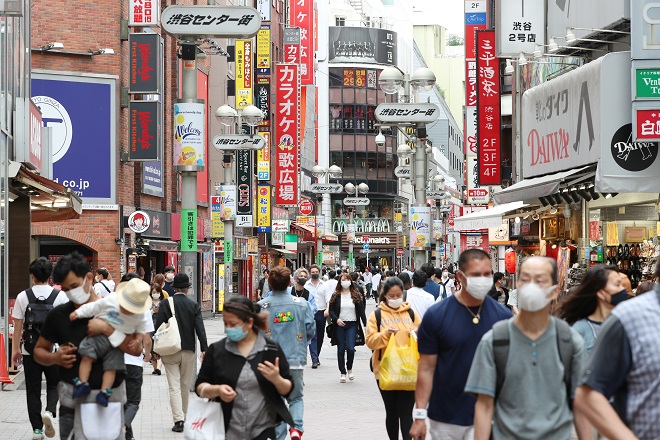 Meanwhile, 16 new cases were reported in the southwestern city of Kitakyushu, Fukuoka Prefecture, where a second wave of coronavirus infections is feared to be occurring.

The central government is watching the situations in Tokyo and Kitakyushu "with a sense of crisis," economic revitalization minister Yasutoshi Nishimura told a press conference.

"Such spread could happen anywhere," he said, stressing the importance of taking precautions.

In Kitakyushu, the latest daily count was lower than the city's record high of 26 marked just Friday. But new cases were reported for eight days in a row, taking the total over the period to 85 cases.

Of Saturday's 16 cases, nine were medical staff members at Kitakyushu General Hospital, where cluster infections have occurred. The total number of cases linked to the hospital thus rose to 23.

In Kitakyushu, an elementary school boy under 10 was found infected with the virus, as was a teacher of a special needs school in his 30s.

In Tokyo, virus transmission routes were unknown for six of the 14 new cases. Seven patients were newly found infected at Musashino Central Hospital, boosting the total number of cases involving the hospital to 16.

Across Japan, 45 infection cases were confirmed Saturday. The coronavirus-linked death toll rose by five to 908.