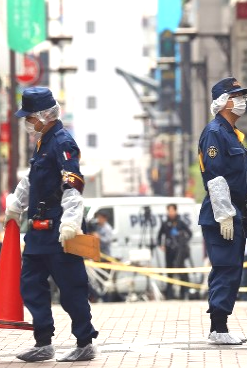 TOKYO- A self-employed man in his 40s was robbed of a bag containing 40 million yen in cash in broad daylight in Tokyo's busy Ginza district Friday afternoon.
According to the Metropolitan Police Department's Tsukiji police station, the mugging, believed to involve three men, happened on the Suzuran street in the capital's Chuo Ward.
A man hit the victim in the back and kicked him in the stomach before grabbing the bag. The bag contained a total of 72 million yen, but some of the money fell out of it during the attack, police sources said.
Security camera images showed the attacker in a blue jacket and jeans fleeing from the scene, followed by two men on a motorcycle, the sources also said.
The owner of the money yelled and tried to protect his bag, a witness said.
"It reminds me of the incident in Fukuoka," another onlooker said, referring to the daylight robbery in which some 380 million yen was grabbed in the southwestern Japan city just on Thursday. (Jiji Press)