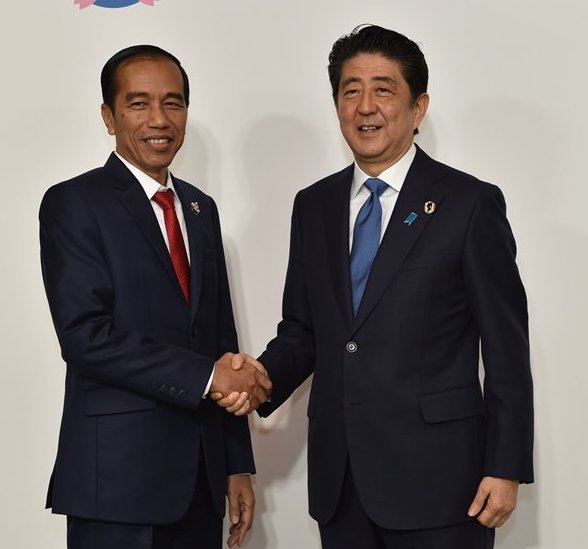 BOGOR, Indonesia- Japanese Prime Minister Shinzo Abe and Indonesian President Joko "Jokowi" Widodo met south of Jakarta on Sunday, with the leaders expected to affirm coordination on maritime security amid tension over China's military buildup in disputed waters of the South China Sea.
In the talks at Bogor Palace, Abe is also set to pitch Japan's cooperation in developing infrastructure in the Southeast Asian country, including a new port project in eastern Jakarta, at a time when Indonesia is strengthening economic ties with China.
Abe's visit to Indonesia is the latest stop on a four-nation tour since Thursday that has already taken him to the Philippines and Australia. He will fly to Vietnam on Monday.
Japan views Indonesia, with the world's fourth-largest population and high economic potential, as a major power in the 10-member Association of Southeast Asian Nations and expects it to play a leading role in addressing regional challenges such as the South China Sea issue, Japanese officials said.
Territorial disputes in the South China Sea involve China and five other governments -- Brunei, the Philippines, Malaysia, Vietnam and Taiwan.
Although neither Japan nor Indonesia is a claimant in the disputes, the officials said both countries are worried about China's increasing military presence in the busy shipping lane and keen to maintain a rules-based order in the sea.
Tokyo is involved in a dispute with Beijing over the Japanese-controlled Senkaku Islands in the East China Sea that are claimed by China, which calls them Diaoyu.
In Sunday's talks, Abe and Jokowi are set to agree on strengthening maritime cooperation, with the Indonesian navy remaining alert in monitoring and patrolling the vicinity of the Natuna Islands on the southern edge of the South China Sea. The navy has also been cracking down on Chinese fishing boats operating illegally in the country's exclusive economic zone.
China recognizes Indonesian sovereignty over the Natuna Islands but at the same time argues that Beijing and Jakarta have overlapping claims for maritime rights and interests in the area that need to be resolved -- an assertion Indonesia rejects.
Indonesia has also proposed cooperation with Japan on exploration for oil and gas in the Natuna area.
In the area of infrastructure development, aside from the new Patimban port project, the leaders may also take up a medium-speed railway project linking Indonesia's two largest business hubs of Jakarta and Surabaya.
The project is part of efforts to revitalize the existing 725-kilometer railway between Jakarta and Surabaya, after Japan lost out to China in September 2015 in bidding to construct a high-speed railway between Indonesia's capital and the West Java provincial capital Bandung.
Abe and Jokowi are also expected to affirm security ties in light of an agreement to promote talks for forging a pact on the transfer of Japanese defense equipment and technology to Indonesia, the officials said.
Amid the growing threat of Islamist extremists, the leaders may also discuss counterterrorism measures, with Indonesia home to the world's largest Muslim population, the officials said. (Kyodo News)