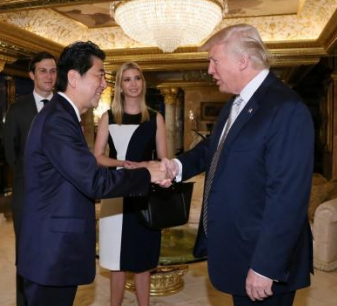 TOKYO- Japanese Prime Minister Shinzo Abe and U.S. President Donald Trump on Saturday agreed to hold their first summit meeting in Washington on Feb.10, said Abe here after telephone talks with Trump on Saturday.
The two leaders made the agreement during their 42-minute long telephone conversation starting from 11:05 p.m. (1405 GMT) on Saturday, the first such talks since Trump sworn in as 45th U.S. president last week.
Both sides affirmed the importance of Japan-U.S. alliance and exchanged views in economic and security fields, Abe told reporters here after the call.
As for the two leaders' summit talks next month, Abe said he hoped to meaningfully and frankly exchange views with Trump in the fields including bilateral economic and security ties.
The Japanese Prime Minister also said he hope Japan will play its due role as U.S. alliance.
Japan's Deputy Chief Cabinet Secretary Hagiuda Koichi said after the call that Abe, in Saturday's telephone talk, also explained contribution of Japan's automobile industry to the United States.
The leaders think that the Japan-U.S. economic relationship is important, said Koichi.
However, the two leaders didn't get into any detailed conversations on issues such as the Trans-Pacific Partnership (TPP) and Free Trade Agreement (FTA), said the deputy chief cabinet secretary.
During the telephone talk, Trump stressed that Japan-U.S. alliance is important and Japan is important partner for the United States, said Koichi.
Japan has been eager to repair relations with Trump, as the nation has largely bet its support on Hillary Clinton in the U.S. Presidential election and Trump's win has caught it off guard.
Soon after Trump's victory in the U.S. presidential election, Abe held unofficial talks with the U.S. president-elect in New York in November last year.
Trump on Monday signed an executive order to officially withdraw U.S. from the TPP trade deal as part of his efforts to protect American jobs.
The TPP, which Abe has backed enthusiastically, is a free trade pact between 12 Asia-Pacific countries and was formally signed by ministers from these 12 countries in last February after more than five years' negotiation.  (Xinhua News)