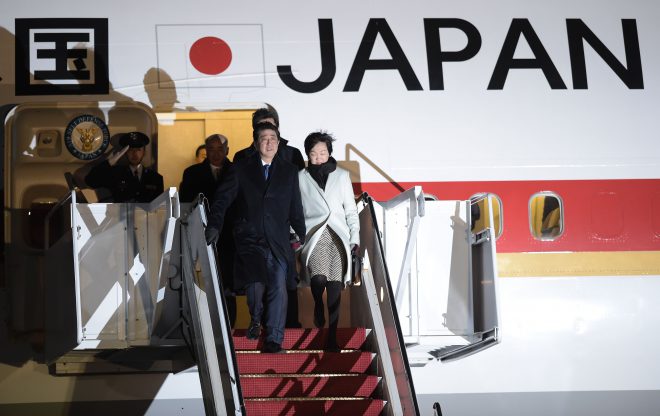 Abe, Trump to reaffirm US duty to defend Senkakus

WASHINGTON- President Donald Trump is expected to reaffirm the United States’ obligation to defend the Japanese-administered Senkaku Islands under the bilateral security treaty, in his first summit with Japanese Prime Minister Shinzo Abe on Friday, a senior US administration official said Thursday.
Automotive trade is likely to be high on the summit’s agenda, while the yen’s depreciation will possibly be discussed, the official told a telephone conference.
Abe arrived at Joint Base Andrews in the suburbs of Washington on Thursday on a Japanese government plane. Abe hopes the US visit will show the world the unwavering Japan-US alliance, Japanese officials said.
The US official clarified that Article 5 of the Japan-US security treaty, which stipulates the US government’s obligation to defend the territories under Japan’s administration, applies to the Senkaku Islands in the East China Sea, which are claimed by China.
“The standing US policy has been that the Japan-US security treaty, Article 5 of that treaty, does apply to the Senkaku Islands,” the official said. “That certainly is the Trump administration’s policy as well.”
“We oppose any unilateral actions that would seek to undermine Japan’s administration of the islands,” the official continued.
Referring to a statement by US Secretary of Defense James Mattis during his recent visit to Japan that the Japan-US alliance is the cornerstone of prosperity, security and freedom in the Asia Pacific region, the official said, “I think that you’re going to hear similar messages from the president himself.”
On the economic front, the official said that automotive trade is “certainly going to be an important topic of conversation in both directions, because it’s such an iconic and critical part of the Japanese economy.” Trump has claimed that Japan is unfair in auto trade with the United States.
On Trump’s accusation that Japan has manipulated currency markets to guide the yen lower, the official said the topic is “not something that’s at the top of the list” of agenda items, but suggested that it may come up “naturally in conversation.”
The president believes that bilateral trade agreements are “really the way to go for the United States,” the official said. He will be “certainly touching on possible paths forward with relation to the overall economic relationship” with Japan.
In the summit, Abe is planning to propose setting up a joint ministerial panel to discuss trade policy measures and other economic issues between the two nations, according to Japanese government sources. He will also communicate Japan’s willingness to support job creation in the United States, the sources said.
On the weakening yen, Abe plans to seek an understanding of Trump that it is a byproduct of the Bank of Japan’s monetary easing policy aimed at achieving the country’s inflation target.
The two leaders will hold a joint press conference after their talks at the White House and announce the outcome of the meeting. The Japanese and US governments are planning to issue a joint statement to highlight their intention to enhance the bilateral alliance, according to the sources.
Later on Friday, Abe and Trump will travel together to the president’s Mar-a-Lago estate in Palm Beach, Florida. They are slated to play golf at a course near the residence on Saturday.
Abe’s two-night stay at Mar-a-Lago is a “personal gift” from Trump, the official said, indicating that the president will pay for the visit out of his pocket.
Abe will return to Japan on Monday afternoon.
Japanese Deputy Prime Minister and Finance Minister Taro Aso and Foreign Minister Fumio Kishida are accompanying Abe on his US visit.
They will attend the Abe-Trump summit. In addition, Aso will meet with US Vice President Mike Pence, while Kishida will hold a meeting with US Secretary of State Rex Tillerson, both for the first time. (Jiji Press)