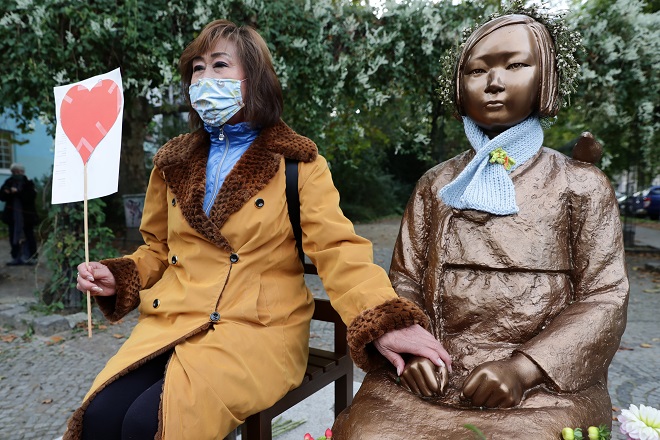 Berlin- The central Berlin district of Mitte said Tuesday a statue symbolizing so-called wartime comfort women built there recently will not be removed for the time being.

The announcement came after a pro-South Korea civic group in Germany which erected the statue requested a local administrative court to issue a temporary injunction against an order by the district to remove the monument.

The Mitte government had ordered the statue be removed by Wednesday.

Comfort women, mostly Koreans, were forced into prostitution for Japanese troops before and during World War II.

In a statement, Stephan von Dassel, head of the district, said that the district will wait for the court's ruling and that he hopes the civic group and the Japanese government will reach a compromise deal beneficial to both sides.

At the same time, the district head said he is against any acts of sexual violence against women, especially those during wartime.

A ceremony to unveil the statue was held in late September.

The district, which had initially permitted the statue's establishment, revoked its permission on Thursday and ordered the removal, saying that it is inappropriate for a politically and historically complicated bilateral conflict to be handled in Germany.

According to the civic group, the comfort women monument in Mitte is the third such statue in Germany, but it is the first one set up in a public location. Jiji Press