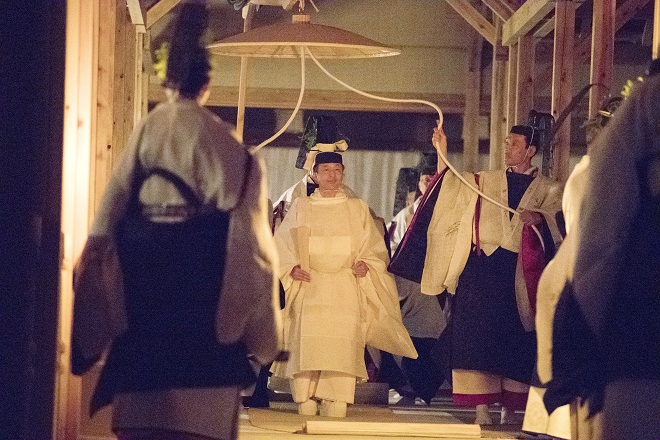 Tokyo--"Daijokyu-no-Gi," the centerpiece of the "Daijosai" grand thanksgiving ceremony related to the enthronement of Japanese Emperor Naruhito, took place at the Imperial Palace in Tokyo from Thursday evening through early Friday.

Emperor Naruhito, who assumed the throne on May 1, offered newly harvested grain to the gods to pray for bountiful crops and peace in the country. Daijokyu-no-Gi was held at "Daijokyu," a set of nearly 40 temporary buildings constructed on a some 90-meter-square site in the East Gardens at the palace in Chiyoda Ward.

Daijosai, a Shinto-linked ceremony held by an Emperor only once during his reign, is regarded as the most important enthronement-related ceremony he performs.

After cleansing himself at the "Kairyuden" building at Daijokyu, Emperor Naruhito, clad in the "Gosaifuku" ritual costume made of white silk, entered the "Yukiden" hall at around 6:30 p.m. (9:30 a.m. GMT) to start the "Yukiden-Kyosen-no-Gi" rite.

In the rite, the Emperor, sitting on a "goza" mat and looking in the direction of Ise Jingu, a grand Shinto shrine in the city of Ise in Mie Prefecture, central Japan, gave offerings of rice from the eastern prefecture of Tochigi harvested this year, millet, sake and marine products, to Imperial ancestors and the gods, according to the Imperial Household Agency. The inside of Yukiden was illuminated by a lantern.

After offering a prayer and reading the "Otsugebumi" Imperial message, he tasted the offerings. Empress Masako, in white "junihitoe" ceremonial kimono, separately offered a prayer.

Other members of the Imperial Family, including Crown Prince Akishino, the younger brother of the Emperor, and Crown Princess Kiko, attended the two rites.

"Daikyo-no-Gi" grand banquets will be held for the Emperor and Daijosai guests on Saturday and Monday at the Imperial Palace.

The government allocated a budget of some 2,443 million yen for Daijosai, a ceremony with religious elements. Daijosai can be recognized as a public event as it is a traditional Imperial succession ceremony, the government said.

Members of the public will be allowed to view the exterior of Daijokyu buildings from Thursday to Dec. 8.

Emperor Naruhito and Empress Masako will report the Emperor's enthronement to Ise Jingu on Nov. 22-23 in a ceremony called "Shinetsu-no-Gi."

The couple will visit the mausoleum of Emperor Jinmu, Japan's mythical first Emperor, in Nara Prefecture, western Japan, and that of Emperor Komei in Kyoto Prefecture on Nov. 27.

On Dec. 4, Emperor Naruhito and Empress Masako will offer prayers at the three sanctuaries of the Imperial Palace in the last of major events related to the Emperor's enthronement. Jiji Press