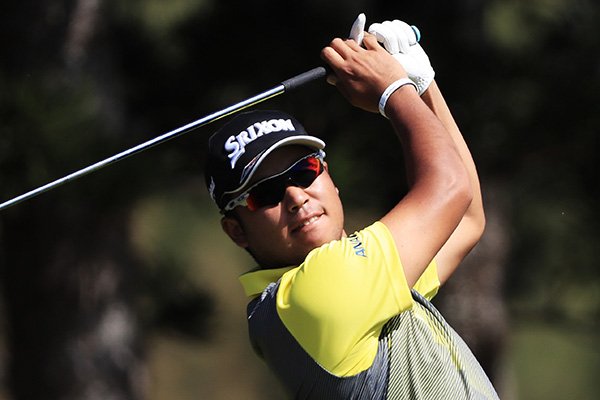 Golf: Matsuyama runner-up behind Thomas at Tournament of Champions

KAPALUA, Hawaii- Japan's world No. 6 Hideki Matsuyama shot a 3-under 70 on Sunday to finish second at the SBS Tournament of Champions, three strokes behind Justin Thomas of the Unites States. Matsuyama started the final round two strokes off the pace and carded one eagle, four birdies and three bogeys for a total of 19-under 273 at Kapalua Resort's Plantation Course. Thomas, who shot 67 in the previous three rounds, rounded off with a 69. Matsuyama went within one shot of Thomas on the back nine after holing a 59-foot wedge for eagle on the par-4 14th, but his putting let him down as he settled for pars on Nos. 15 and 16. A bogey on the 17th dashed Matsuyama's chance for a fourth title on the U.S. PGA Tour, while Thomas, who had a double bogey on the 15th, holed out with two straight birdies to win in prize money. "I've placed myself in a reasonable position so I'm not feeling too down," Matsuyama said. "(But) the putts that were going in until the third day didn't go in even with good strokes, and that was disappointing." "I thought there was a chance when I came within a stroke in the second half, so not catching him (Thomas) on the 15th and 16th is regrettable." Matsuyama had a stellar end to 2016, winning four of the last five tournaments he took part in, including the HSBC Champions in Shanghai, where he become the first Asian to win a World Golf Championships series event, and the 24-year-old picked up where he left off in his year-opening tournament. "I'll train again and look to head into the next tournament in a fine condition," said Matsuyama, whose $712,000 in prize money and leads the tour with over $3 million on the young season. The victory was the second on the young season for Thomas and the third of the 23-year-old's career. Thomas' winners' check of $1.22 million lifted him to second place in season earnings, roughly $360,000 behind Matsuyama. American Jordan Spieth, who in 2015 won both the Masters and U.S. Open, tied for third, three strokes back of Matsuyama. (Kyodo News)