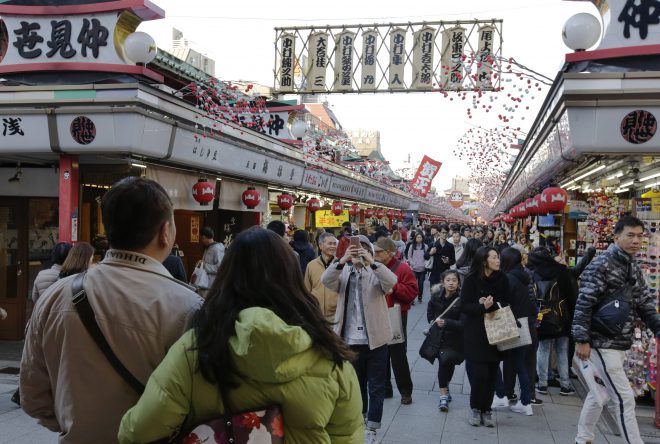 TOKYO- The Japanese government has begun cracking down on rip-offs by unauthorized tour operators targeting visitors from abroad.
Such fraud stems from travel agencies’ use of tour operators, often called “land operators” in Japan, for the arrangement of transportation as well as lodging, shopping and other holiday activities.
Malignant land operators use tour guides for free and work with specific duty-free shops. The guides take foreign tourists to the shops in return for handsome kickbacks from sales of goods at unfairly high prices, according to the Japan Tourism Agency.
The Fukuoka prefectural police department announced in March last year that a land operator had been charged with using a Chinese man and woman with no work permits as tour guides, who earned a total of 75 million yen by taking tourists from China to duty-free shops.
Complaints about such fraudulent practices to the Ministry of Land, Infrastructure, Transport and Tourism by foreign visitors to Japan have been increasing. One said a medicine bought at the strong recommendation of a duty-free shop in Japan turned out fake in a check in the home country. The government is concerned as it is promoting tourism as a pillar of its strategy for economic growth.
While travel agencies are legally required to be registered with the central and local governments, land operators are not subject to the travel agency law. As part of efforts to crack down on fraudulent practices, the tourism agency will submit a bill to the current session of the Diet, Japan’s parliament, to revise the law to require registration of land operators.
In a survey last June to prepare for the legal revision, the agency found that there were at least 864 land operators. Some 70 pct of 293 operators that replied to a questionnaire said they took tourists to souvenir shops.
Among other survey findings, 822 of 2,320 travel agencies were using land operators.
The bill for the legal revision envisions that land operators will be required to register with their local governments, with the aim of placing them under official supervision.
When land operators work for travel agencies under business consignment contracts, they will also be required to keep written records, in order to avoid problems, and appoint tour managers with a basic knowledge of operations, including safety regulations for bus services.
In addition, the head of the Japan Tourism Agency will be authorized to issue business improvement orders to land operators when necessary and revoke registrations if they fail to comply with such orders. The registration of such operators will not be reinstated for five years.
“The (envisaged) law, to protect foreign tourists, is unusual,” an agency official said.
The agency plans to avoid setting registration requirements for land operators that are too strict, in an effort to prevent black-market operators, officials said.
The government considers it essential to avoid satisfaction rates declining among foreign tourists, as it aims to boost the annual number of visitors to Japan from abroad to 40 million by 2020.
The estimated number of visitors to Japan in 2016 increased 21.8 pct from the previous year to 24,039,000, hitting a record high for the fourth consecutive year. (Jiji Press)