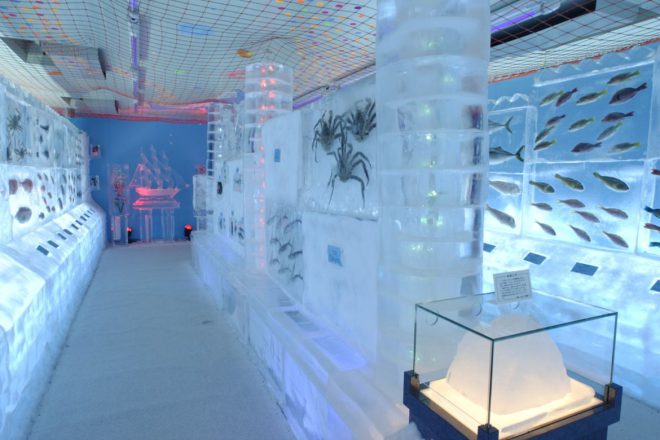 Kesunnuma, MIYAGI PREF.- An aquarium displaying local fish frozen in ice opened for the first time in about six years on Saturday in Kesennuma, Miyagi Prefecture, one of the Pacific coastal cities hit hardest by the March 2011 tsunami.
The facility had to suspend operations due to damage from the tsunami, which was triggered by a 9.0-magnitude earthquake off Japan's Tohoku northeastern region.
"We finally reopened," said Hiroshi Okamoto, 66-year-old representative director of Okamoto Seihyo Co., the operator of the ice aquarium. "I hope children and other young people will enjoy it."
The temperature inside the aquarium is set at minus 20 degrees Celsius. A total of some 600 fish and shells caught off Kesennuma are exhibited in ice blocks.
A newly launched projection mapping event caught the attention of visitors. (Jiji Press)