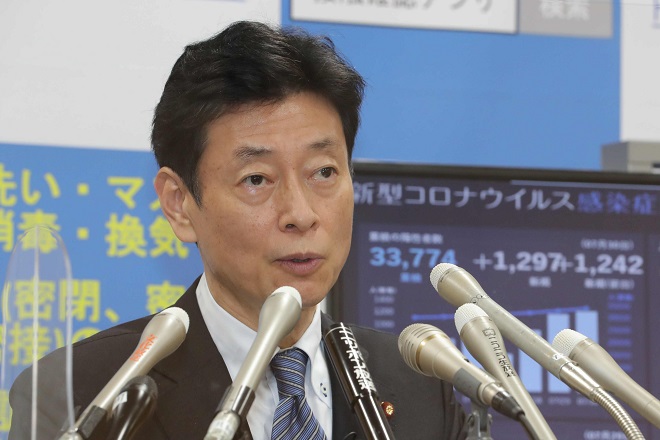 Japan may introduce orders and punishments for businesses that fail to meet business suspension requests as part of a revision to a special measures law to prevent the spread of the new coronavirus, economic revitalization minister Yasutoshi Nishimura has said.

Nishimura said he is in talks with the Cabinet Legislation Bureau over the possible revision.

"We will swiftly consider including business suspension orders and penalties" in the possible law revision, the minister said.

Nishimura suggested that the provision of compensation to businesses that comply with suspension requests will not be included in the law, as it is technically difficult and many countries around the world are not doing so.

"We are in effect already providing compensation," he said, noting that the government is offering a variety of subsidies related to the virus response.

He said the COVID-19 epidemic was the first case for which the special measures law was invoked, thus creating confusion over how the central and local governments should balance responsibilities.

"The business suspension request initially considered by the Tokyo metropolitan government in April was in every sense of the word a "lockdown," covering a variety of sectors," Nishimura said. "There were sectors that were necessary for everyday life, so we spent time discussing (with the metropolitan government)."

He fought back against criticisms by Tokyo Governor Yuriko Koike that the central government impeded Tokyo's coronavirus prevention efforts.

"Governor Koike said that she 'thought she was the boss but heard the voice of the heavens,' but from my perspective it's the voice of law," Nishimura quipped. "Suspension requests should be considered with the fact that it restricts private rights, so I took action as someone responsible for executing the policy."

"I have accountability over the declaration and lifting of a state of emergency," the minister added. "Deciding to which industries business suspension requests are issued is under the authority of governors, so I hope they fulfill their accountability."

Nishimura said that tweaking the balance of responsibilities with municipalities in the special measures law revision will lead to many discussions with local governments, and doing so now will lead to further confusion.

On whether there should be a headquarters for disease response similar to the U.S. Centers for Disease Control and Prevention, the minister said that Prime Minister Shinzo Abe serves as head commander for Japan's response, with Nishimura, health minister Katsunobu Kato and Chief Cabinet Secretary Yoshihide Suga attending liaison meetings and coordinating government policies.

"There are discussions about creating the Japanese version of the CDC, but are U.S. measures working so well?" he said. He added that boosting the National Institute of Infectious Diseases is a major issue that needed to be considered.

"Japanese public health centers, which are of the highest quality in the world, is lacking funds and personnel," Nishimura said. "We should expand them and create a system in which information can be shared in real time between the central government, prefectures and municipalities." Jiji Press