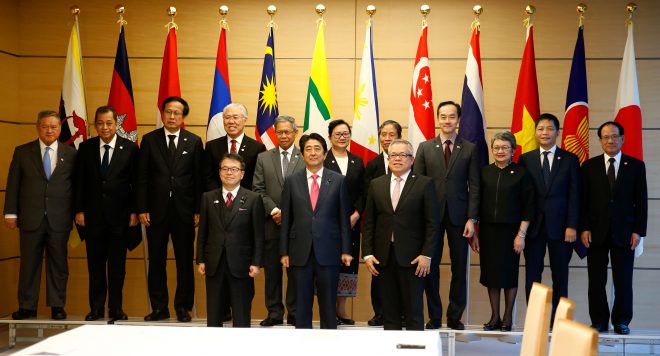 Japan, ASEAN agree to work together to promote free trade

OSAKA- Japan and the Association of Southeast Asian Nations member states agreed to work together to promote free trade at a meeting of their economic ministers in the western Japan city of Osaka Saturday.
In a joint statement, participants said they will aim to create “high-quality” trade and investment rules in negotiations on the proposed Regional Comprehensive Economic Partnership free trade pact among 16 Asia-Pacific countries.
High-quality rules will be pursued in areas including customs procedure facilitation and intellectual property right protection. “We’ve made a good start toward the realization of a high-quality RCEP,” Japanese trade minister Hiroshige Seko, who cochaired the meeting, said after the meeting.
The meeting produced a positive message to promote global free trade, Seko stressed.
In the statement, adopted at the meeting, Japan and the ASEAN states reaffirmed that they will aim to conclude an RCEP deal at an early date as sought by the ASEAN side.
Japan proposed economic cooperation measures for nurturing human resources and supporting small companies in ASEAN countries. Details of the cooperation will be set later.
With signs of protectionism increasing globally, including the United States’ withdrawal from the Trans-Pacific Partnership trade deal in January, the importance of RCEP is growing as a possible free trade framework in the Asia-Pacific region.
The 16 RCEP negotiation members include Japan, China, South Korea and the 10 ASEAN states. (Jiji Press)