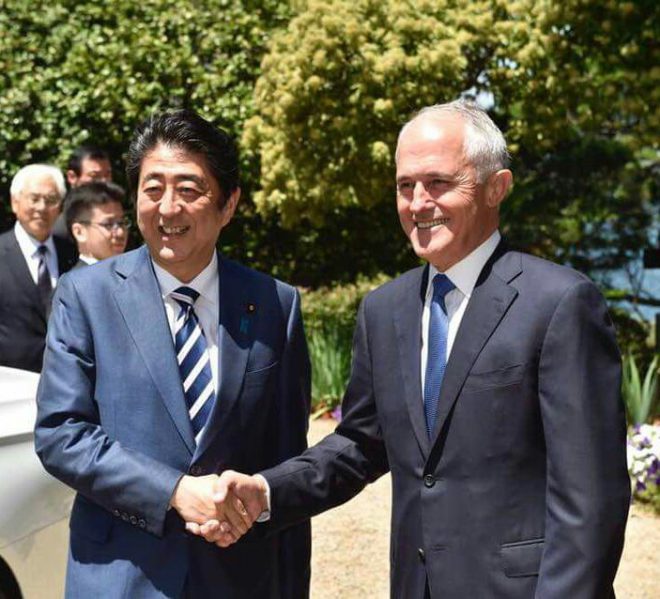 Japan, Australia vow to work closely with U.S. under Trump

SYDNEY- Japan and Australia will continue to work in close coordination with the United States after the inauguration next week of President-elect Donald Trump, Prime Minister Shinzo Abe and his Australian counterpart Malcolm Turnbull said Saturday after bilateral talks in Sydney.
According to a joint press statement, Abe and Turnbull affirmed that their countries' respective alliances with the United States "remain as relevant and important today as they have been for over six decades."
"We will work closely with the coming administration, as we have been, to advance the region's interests and our shared goals," Turnbull said at a joint press appearance after the summit.
Abe said he and Turnbull had "confirmed our intention to solidly coordinate with the incoming Trump administration."
According to the statement, Japan and Australia will "continue to work proactively, alongside the U.S. and other like-minded countries, including India, to maintain the rules-based international order and support a peaceful and stable Indo-Pacific region."
At a press conference in New York Wednesday, Trump named Japan, alongside China and Russia, as a country he said will "respect (the United States) far more" than under past administrations.
Abe and Turnbull also reaffirmed Saturday their commitment to free trade, including the early entry into force of the Trans-Pacific Partnership trade agreement, which Trump has pledged to dump.
Japan and Australia are among the 12 Pacific Rim nations that signed the TPP in February last year. The pact needs U.S. ratification to come into force, meaning Trump will effectively kill the pact in its current form if he sticks to his commitment to pull out of it as soon as he takes office next week.
Abe said he and Turnbull also agreed to work together toward the prompt conclusion of negotiations for the Regional Comprehensive Economic Partnership, another Asia-Pacific mega-pact that -- unlike the TPP -- excludes the United States but includes China.
Abe also said he and Turnbull agreed to enhance their coordination in addressing issues involved with the South China Sea. Without mentioning China by name, the leaders appeared to caution the country over its expansionary activities in the sea, where it has laid sweeping territorial claims.
According to the joint statement, the leaders "urged all parties to exercise self-restraint, and to avoid actions that would escalate tensions, including the militarization of outposts in the South China Sea."
They reiterated their opposition to "any unilateral or coercive actions that could alter the status quo and increase tensions in the East China Sea," in an apparent swipe at Chinese ships' intrusion into Japanese territorial waters around the Senkaku Islands, which are administered by Japan but claimed by China.
"It is more necessary than ever before for Japan and Australia, as special strategic partners, to play a leading role for regional peace and prosperity, as we both share common values such as freedom, rule of law and democracy," Abe said.
"We've confirmed our commitment to the rule of law, free trade, open markets in our region -- the foundation upon which our prosperity, and that of billions of other people in our region, depends," Turnbull said.
Following the leaders' talks, Japan and Australia signed a revised bilateral defense logistics cooperation pact. (Kyodo News)