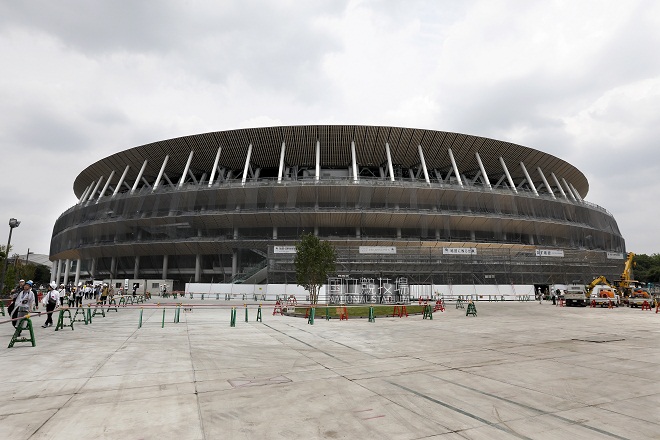 Tokyo--The Japanese government confirmed Tuesday for the last time that the new National Stadium, the main venue for the 2020 Tokyo Olympic and Paralympic Games, will be completed at the end of November.

"We were able to confirm that the stadium will be completed as scheduled and within its budget. We are very happy," Chief Cabinet Secretary Yoshihide Suga told a press conference after the confirmation at a meeting of related cabinet ministers.

Work to build the stadium in Tokyo's Shinjuku Ward started in December 2016. The stadium's opening event will be held on Dec. 21.

At the meeting, the ministers were informed that a decision on a plan to privatize the stadium, initially scheduled for this year, will be deferred until after the international sporting events end in early September next year.

The government has faced complaints from businesses interested in acquiring the operating rights of the stadium because it was unable to present the building's detailed design before the events due to security reasons.

The idea has been floated that the stadium will keep a running track after the Olympics and Paralympics. Sports minister Koichi Hagiuda, however, told a press conference Tuesday that the government basically hopes it will be renovated as a ground only for ball games, although he also said the government will listen to opinions from the private sector.

According to the Japan Sport Council, the new stadium has been completed and will be transferred to the government at noon on Nov. 30.

Total construction costs came to about 156.9 billion yen, 2.1 billion yen lower than the ceiling of about 159 billion yen set for the project to build the stadium. Jiji Press