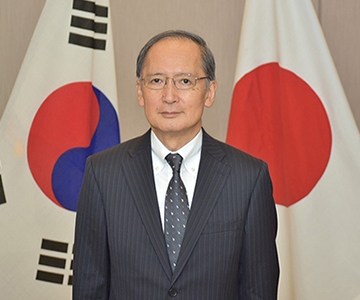 TOKYO- The Japanese ambassador to South Korea returned home from Seoul on Monday in protest against the erection of a statue in Busan dedicated to so-called comfort women who were forced to work in Japan's wartime brothels. The envoy, Yasumasa Nagamine, is expected to stay in Japan for a week or so, according to a source familiar with bilateral relations. Japanese Prime Minister Shinzo Abe's government also recalled the Consul General in Busan, Yasuhiro Morimoto. Nagamine's temporary homecoming may last longer, however, as there are no signs so far that the statue of a girl symbolizing the comfort women will be removed shortly from in front of the Japanese Consulate General in the city at the request of Tokyo. Nagamine told reporters before his departure the installation of the statue in Busan is "very deplorable, so I'm returning home." The latest statue dispute comes despite a bilateral agreement in December 2015 aimed at fully settling the issue of comfort women procured for the Japanese military brothels before and during World War II. The Korean Peninsula was under Japanese colonial rule from 1910 to 1945. Abe in the agreement apologized to all the women who "suffered incurable physical and psychological wounds as comfort women" and the Japanese government disbursed 1 billion yen ($8.5 million) last year to a South Korean fund helping former comfort women in line with the accord. The 2015 agreement touched upon the issue of a similar statue of a girl built in front of the Japanese Embassy in Seoul. South Korea said that it "acknowledges" Japan is concerned about the statue and will "solve" the issue in an appropriate manner. But South Korean authorities stopped short of getting rid of the statue erected by a citizens' group in Busan on Dec. 30, prompting Abe to renew his call on South Korea on Sunday to follow up on the agreement and remove it. (Kyodo News)