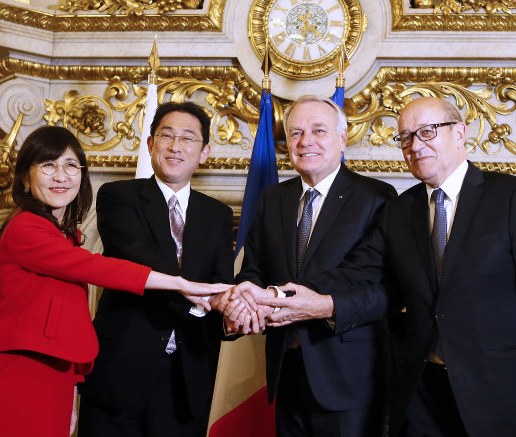 PARIS- The defense and foreign ministers of Japan and France agreed at their "two-plus-two" meeting on Friday to start negotiations for a bilateral accord on sharing defense supplies and services. In a joint statement issued after the meeting in Paris, the ministers also expressed opposition to "unilateral action that would raise tensions" in the South China Sea, a reference apparently to China's land reclamation and other activities in the contested waters symbolizing its growing assertiveness. The third meeting of the kind between the two countries involved Japanese Defense Minister Tomomi Inada and Foreign Minister Fumio Kishida and French Defense Minister Jean-Yves Le Drian and Foreign Minister Jean-Marc Ayrault. Under the envisioned acquisition and cross-servicing agreement, Japan's Self-Defense Forces and the French military would provide each other with supplies, such as water and food, and services, including equipment transportation and repair work. Ayrault said at a press briefing that France and Japan have taken a new step in defense cooperation and will be able to further collaborate on humanitarian assistance and U.N. peacekeeping operations. Kishida told reporters that Japan and France will seek to finalize the acquisition and cross-serving agreement "at the earliest time possible." Japan already has such agreements with the United States and Australia, and is negotiating similar accords with Britain and Canada, all part of Tokyo's effort to expand defense cooperation with other countries. It is also considering a similar deal with New Zealand. In the joint statement, the ministers called on all parties that have stakes in the sea to respect their obligations under international law and refrain from reclaiming land, building outposts on it or using them for military purposes. On the basis of a bilateral defense equipment development accord that went into force last year, they also confirmed their governments' intention of turning joint research into undersea drones that search for mines into concrete form. Regarding the humanitarian crisis in Syria, Kishida unveiled a Japanese plan to provide $240 million to surrounding countries for refugee assistance. Japan and France last held a "two-plus-two" meeting between their defense and foreign ministers in March 2015. The next meeting is expected to be held in Tokyo in 2018. (Kyodo News)