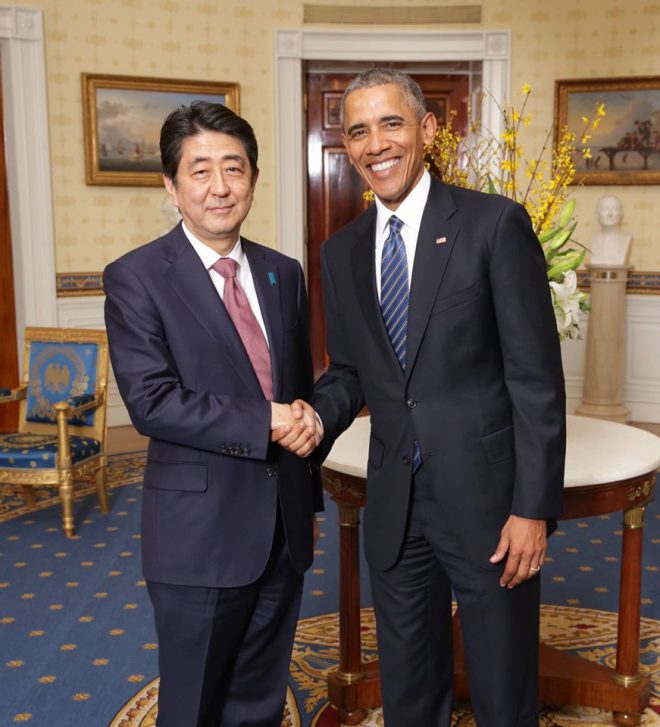 Chief Cabinet Secretary Yoshihide Suga, the Japanese government's top spokesman, made the remarks after Obama delivered his farewell speech in Chicago earlier in the day.
In the speech, Obama spoke of the need for Washington to uphold universal values such as democracy, the rule of law and human rights to maintain its influence in the world.
"The Abe administration experienced four years with President Obama since its beginning (in 2012), and in that time we were able to make Japan-U.S. relations more solid than ever before," Suga told a press conference.
He praised achievements related to recognizing the countries' shared history, including Obama's landmark visit to Hiroshima in May last year and Abe's trip with Obama to Pearl Harbor last month, which included a joint remembrance ceremony at the memorial to the battleship Arizona sunk in Japan's 1941 attack on the harbor.
"We want to continue to share our wish to further develop Japan-U.S. relations, based on those layers of history, with the new Trump administration that will begin on Jan. 20, and I am confident we will be able to do that," Suga said.
Suga also expressed confidence in Michael Flynn, Trump's pick for national security adviser, after Flynn said in Washington the day prior that the incoming administration will attach importance to alliances as a means to ensure security and prosperity around the world.
"When I met (Flynn) myself last year, he stressed that the Japan-U.S. alliance is the linchpin of (U.S.) foreign policy and of high importance to peace and prosperity in the Asia-Pacific region...and I felt we can properly build a relationship of trust," Suga said.
"Alliances are one of the great tools that we have and the strengths of those alliances magnify our own strengths," Flynn said at an event at the United States Institute of Peace on Tuesday. (Kyodo News)