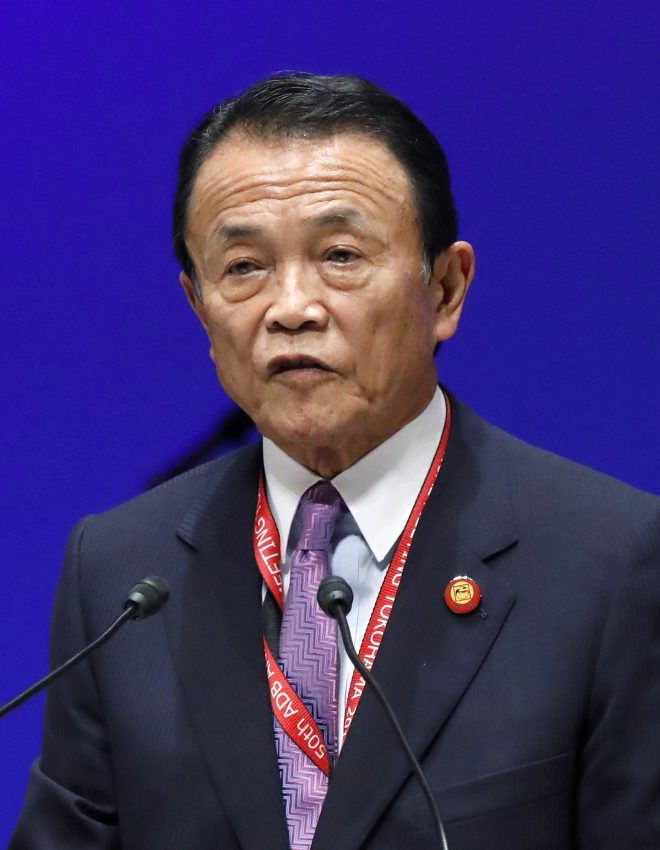 YOKOHAMA- Japanese Finance Minister Taro Aso said Saturday Japan will provide $40 million over two years to a fund the Asian Development Bank newly set up to promote high-quality infrastructure development in the region. "Infrastructure needs in Asia are getting larger both in terms of quantity and quality due to economic development," Aso noted in his speech at the ongoing four-day annual meeting of the ADB that started in Yokohama, south of Tokyo, on Thursday. Citing an ADB estimate that infrastructure development demand in Asia will total 26 trillion dollars in the 15 years from 2016, Aso, also deputy prime minister, then expressed hope that the bank will "continue to promote infrastructure development, and to further mobilize private-sector financing including through PPPs (public-private partnerships)." Aso specifically underscored the importance of focusing on "enhancing quality of infrastructure in terms of lifecycle cost and environmental and social considerations." "From this perspective, I welcome the bank's recent decision to introduce new procurement procedures that put more emphasis on quality," he went on to say. Pointing out that Japan has been cooperating with the ADB in promoting quality infrastructure in the region, Aso announced that Tokyo will provide 40 million dollars over a two-year period to the newly created trust fund to further strengthen its partnership with the bank and promote high-level technologies. In addition to the financial commitment to the ADB fund, Aso vowed the Japanese government's redoubled effort to create a "Southeast Asia Disaster Risk Insurance" to facilitate smooth financing in case of natural disasters. As natural disasters such as typhoons, floods and earthquakes "occur frequently in Asia, and the risk could intensify due to progress of climate change," the ADB is expected to "bolster support in areas such as postdisaster reconstruction and building of disaster-resilient societies," he said. "With our abundant knowledge and experience, Japan has been actively promoting measures such as building disaster-resilient infrastructure," Aso added. (Jiji Press)