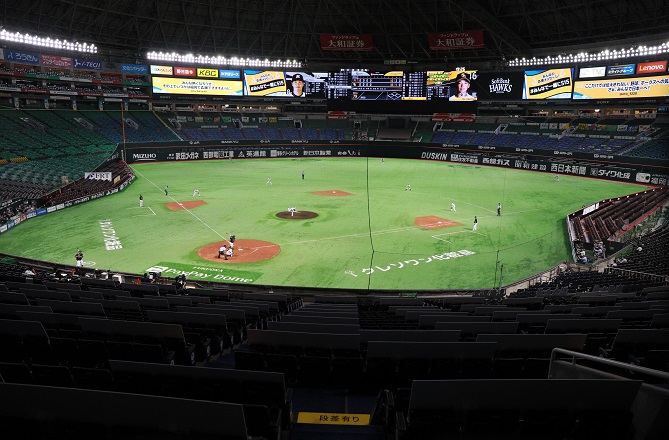 The Fukuoka SoftBank Hawks said Saturday that outfielder Yuya Hasegawa has been infected with the new coronavirus, forcing the baseball club to call off its game scheduled for Sunday.

Hasegawa, 35, is the first player from the 12 Japanese professional baseball clubs to test positive for the virus since the season started on June 19 after a delay of about three months amid the epidemic.

The Hawks' game with the Saitama Seibu Lions at Fukuoka PayPay Dome in the southwestern Japan city will be the first to be canceled since the season opening.

Hasegawa felt discomfort in the pharynx and had a fever of 37.3 degrees Celsius on Friday after practicing at a minor league team facility. As he still had a mild fever on Saturday, he underwent a polymerase chain reaction, or PCR, exam and teste positive.

On Wednesday and Thursday, he attended minor league games with the Hanshin Tigers in Chikugo, Fukuoka Prefecture.

Hasegawa had no direct contact with first team players or leaders. But the Pacific League club decided to cancel Sunday's game after experts warned that infection cannot be ruled out through players or other staff members who have used minor league team facilities, club officials said. Jiji Press