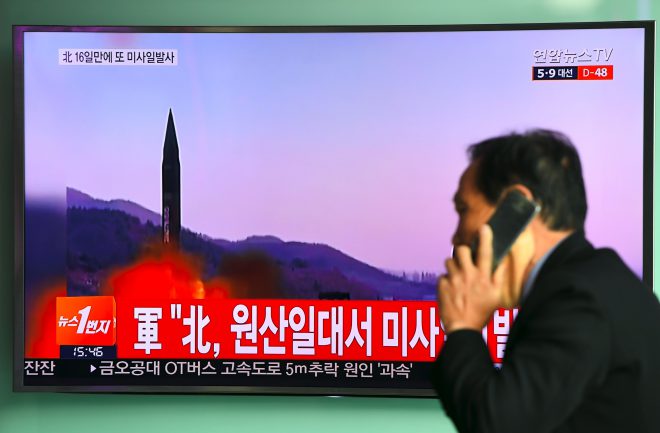 TOKYO- The Japanese government through diplomatic channels on Sunday filed a strong protest against North Korea's ballistic missile launch the same day and denounced the latest provocative action. Japan, the United States and South Korea believe that the missile launch ended in failure. "No projectile heading toward Japan has been confirmed," a senior Japanese Defense Ministry official told reporters, adding, "There have been no circumstances that immediately affect Japan's security." When North Korea fired a ballistic missile on April 5, the Japanese government held a meeting of its National Security Council. But no such meeting was held after Sunday's missile launch attempt. Still, Tokyo remains on alert for further missile launches by the reclusive country, with the crisis control center at the office of Prime Minister Shinzo Abe continuing its surveillance activities. With tensions between the United States and North Korea growing, Pyongyang may take additional provocative actions ahead of the 85th anniversary of the establishment of the Korean People's Army on April 25, informed sources said. The Japanese government will continue to make all-out efforts to grasp the situation in North Korea while discussing measures to protect Japanese nationals in the event of an emergency on the Korean Peninsula. (Jiji Press)