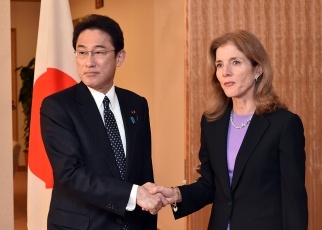 TOKYO- Japan and the United States signed on Monday a pact to effectively remove legal protection over some U.S. military base workers, hoping the move will deter base-linked crimes in Okinawa where the bulk of U.S. military facilities in Japan are hosted.
The signing of the pact, which follows the arrest last year of a U.S. base contractor over the death of an Okinawa woman, supplements a bilateral status of forces agreement that has been criticized by locals who see it as overly protective of U.S. service members and civilian base workers if they are implicated in crimes.
Based on the supplementary pact, the two countries clarified the scope of base workers classified as the "civilian component" in SOFA, who are among those entitled to U.S. primary jurisdiction, or extended protections, if accused of a crime while on duty. They have also crafted criteria for contractors qualified for SOFA coverage. (Kyodo News)