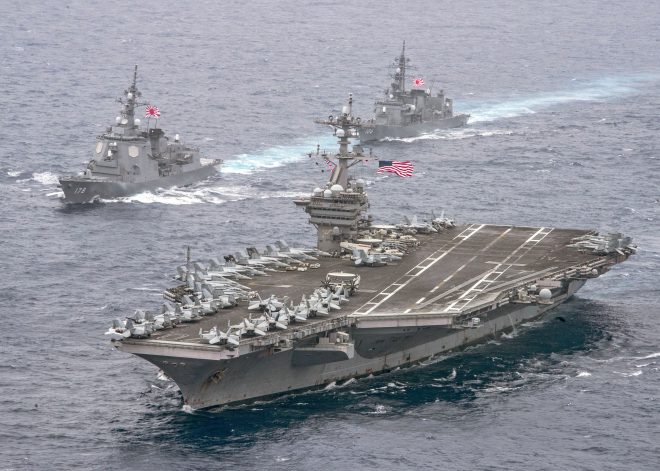 Japan, US mulling joint drill in Sea of Japan

Tokyo- Tokyo and Washington are considering conducting a joint drill involving Japanese Maritime Self-Defense Force destroyers and the nuclear-powered aircraft carrier USS Carl Vinson also in the Sea of Japan, Defense Ministry sources said Tuesday. It is unusual for the two countries to conduct a drill in the sea that lies between Japan and the Asian mainland. The move is aimed at dissuading North Korea from making new provocations. The communist state marked the 85th anniversary of the founding of its Korean People's Army on Tuesday. Japan has so far conducted joint drills involving a US aircraft carrier in the Pacific Ocean or the East China Sea. "A drill in the Sea of Japan would put more pressure on North Korea," an SDF executive said. But the official added that the plan may be withdrawn depending on the situation. Two MSDF destroyers joined the Carl Vinson-led strike group for an exercise in the Philippine Sea on Sunday. They are heading for the Sea of Japan. The joint drill is "aimed at improving the MSDF's tactical ability and strengthening cooperation with the US Navy," Defense Minister Tomomi Inada told a meeting of the House of Councillors Committee on Foreign Affairs and Defense on Tuesday. Such drills "will not represent intimidation by force of arms, which is banned under the constitution," Inada added. Japan's Defense Ministry said that two Air Self-Defense Force fighter jets will participate in a joint exercise being held off Okinawa Prefecture involving the USS Carl Vinson and Maritime SDF ships. The planes are F-15 jets from the Ninth Air Wing in Naha of the southernmost Japan prefecture. The move is apparently another warning against possible further provocations by North Korea, including nuclear and ballistic missile tests. The US Navy strike group led by the nuclear-powered carrier, now cruising east of Okinawa, started the exercise on Sunday, together with the MSDF destroyer Samidare and Aegis-equipped destroyer Ashigara. In the drill, the F-15 jets will make formation flights with Carl Vinson-based F/A-18 planes and engage in communications trainings with the aircraft carrier and the MSDF destroyers. On Tuesday, two Aegis-equipped destroyers of the US Navy's Seventh Fleet and the MSDF conducted a joint exercise in the Sea of Japan, the MSDF said the same day. Japan's Chokai and the USS Fitzgerald engaged in various tactical trainings, MDSF officials said. The two ships are believed to have practiced sharing information gathered from their radars capable of responding to multiple targets. (Jiji Press)