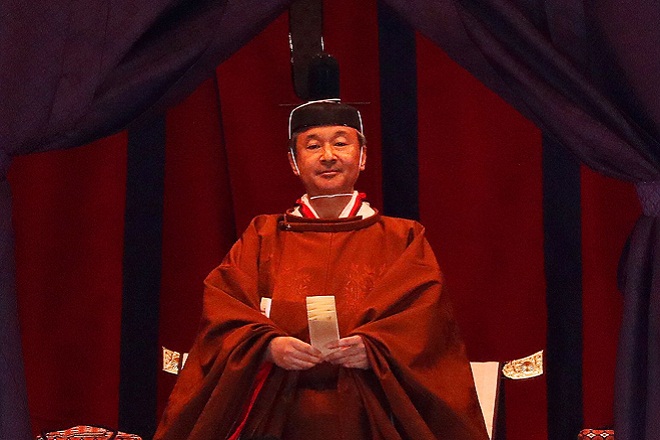 Tokyo--Japanese Emperor Naruhito proclaimed his enthronement in a key state ceremony at the Imperial Palace on Tuesday, attended by about 2,000 guests including some 400 representatives from over 180 countries and two international bodies.

The "Sokuirei-Seiden-no-Gi" proclamation ritual is the main event of the "Sokui-no-Rei" ceremonies to mark the new Emperor's accession to the throne on May 1 this year, following the abdication of his father, then Emperor Akihito, the day before.

The main ceremony started at the palace's "Matsu-no-Ma" state hall shortly past 1 p.m. (4 a.m. GMT). Participants stood up at the sound of the "sho" bell, and the veils before Emperor Naruhito and Empress Masako were lifted.

Delivering a statement from the "Takamikura" throne, the Emperor pledged to "act according to the Constitution and fulfill my responsibility as the symbol of the state and of the unity of the people of Japan, while always wishing for the happiness of the people and the peace of the world, turning my thoughts to the people and standing by them."

Subsequently, Prime Minister Shinzo Abe read out a congratulatory message, saying that every people of the country will make the best efforts to create a new era while looking up to the Emperor as a national symbol.

Abe then led the participants in giving three "banzai" cheers.

After that, the veils before the Emperor and the Empress, who was in the "Michodai" seat next to the Takamikura, were closed, and the participants took a seat at the bell's signal.

The proclamation ceremony finished in about 30 minutes.

The Sokuirei-Seiden-no-Gi ritual was held for the second time under the post-World War II Constitution, which stipulates the Emperor as a national symbol.

Key details of the ritual were unchanged from the previous one, with the prime minister raising the banzai cheers at a position about 1.3 meters lower than where the Emperor was.

During the ceremony, Emperor Naruhito was dressed in the "Korozen-no-Goho" traditional costume, and the Empress Masako in a "junihitoe" 12-layered ceremonial kimono.

Two of the Imperial Family's Three Sacred Treasures--a sword and a jewel--were placed within the Takamikura, as were the state and privy seals.

Earlier on Tuesday, the Emperor performed ceremonies, including the "Sokuirei-Tojitsu-Kashikodokoro-Omaeno-Gi" rite, at the Imperial sanctuaries to report to his ancestors that the Sokuirei-Seiden-no-Gi ceremony will be held.

Later in the day, the "Kyoen-no-Gi" court banquet will take place in the palace. There will be three more such banquets, on Friday and Oct. 29 and 31. Jiji Press