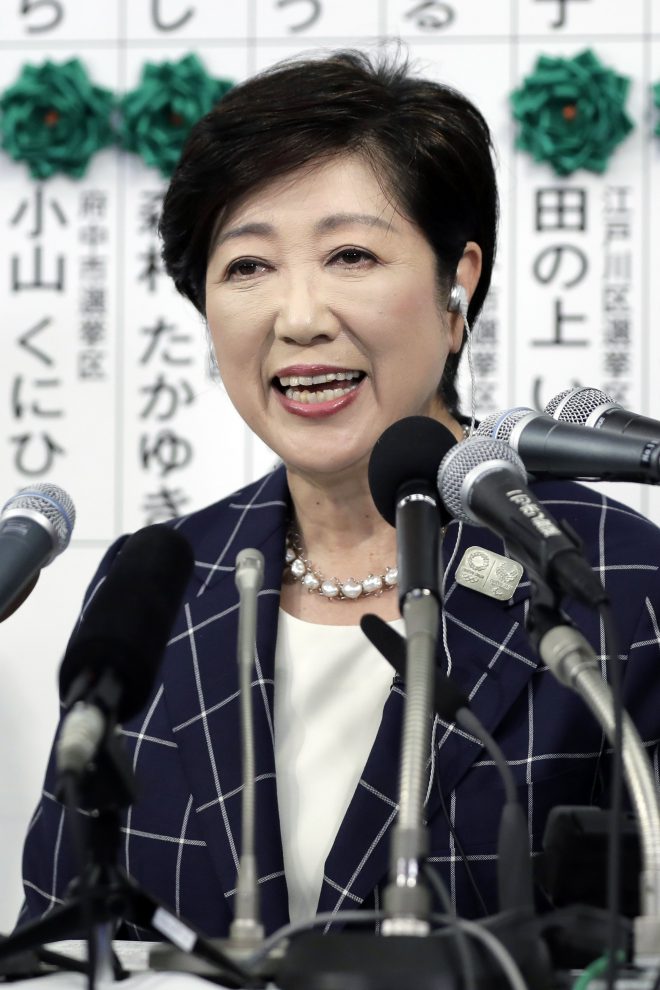 Tokyo- Tomin First no Kai (Tokyoites first group), a regional party led by Tokyo Governor Yuriko Koike, and forces supporting Koike won a landslide victory in a metropolitan assembly election held on Sunday, forcing Prime Minister Shinzo Abe's Liberal Democratic Party to suffer a historic defeat in the capital.
The Koike camp, also including Komeito, won 79 seats of the 127-seat assembly with Tomin First emerging as the leading party with 49 seats, up from six seats before the election, while the LDP, which had the largest preelection strength of 57 seats, gained a record-low of 23 seats, far below the previous all-time low of 38 seats.
The big defeat of the LDP will deal a severe blow to the Abe government and weaken the prime minister's centripetal force within the party, critics said.
Abe has expressed desire for proposing constitutional amendment plans to parliament by the end of the year on the assumption that he will be elected to a third term as LDP president in the scheduled party leadership election in the autumn 2018.
But if LDP members increasingly get frustrated with the Tokyo election results and the power concentration on Abe, he may have to review the plans, the critics said.
In addition, the LDP's historic defeat could affect Abe's decision on a breakup of the House of Representatives, the all-important lower chamber of Japan's Diet, for a snap general election, they said.
Besides Tomin First and the LDP, Komeito captured 23 seats, the Japanese Communist Party 19 seats, the Democratic Party five seats, Tokyo Seikatsusha Network one seat and Nippon Ishin no Kai one seat. All six independents who won seats with Tomin First's backing were certified as the party's candidates later.
Komeito was able to have all its candidates win for the seventh straight Tokyo election, and the JCP increased its strength by two seats from the previous poll. Meanwhile, the DP failed to maintain the preelection strength of seven seats due chiefly to a series of defections.
The metropolitan assembly election results reflected voters' evaluation on not only the Koike administration, launched in August last year, but ways Abe's government and the LDP have dealt with scandals including one with the school operator Kake Educational Institution, run by a friend of Abe, at the center and a remark by Defense Minister Tomomi Inada calling for support of LDP-backed candidates in the election on behalf of the Defense Ministry, the Self-Defense Forces, the defense minister and the LDP.
Voter turnout came to 51.28 percent, up from 43.50 percent in the previous Tokyo poll four years ago.
In the latest contest, Tomin First fielded 50 candidates and supported Komeito candidates as well as independents who were DP members. Meanwhile, the LDP put up 60 candidates to fight in all 42 election districts.
During the campaign period, Koike and Tomin First candidates criticized the LDP's old-fashioned politics and called for refreshing the assembly, leading races in all districts excluding the island constituency.
The LDP denounced Koike as an "indecisive" governor, citing long delays in resolving issues related to the 2020 Tokyo Olympics and Paralympics and relocation of functions of the Tsukiji wholesale market to the Toyosu market. But the party failed to turn away public criticisms of the Kake and Inada problems, in particular.
"The election outcome suggests that my policy of giving priority to Tokyoites' interests was approved," Koike told a press conference. "It's time for people in Tokyo to regain control over politics in the capital," she stressed.
Hakubun Shimomura, head of the LDP's Tokyo chapter, told a separate news conference that it was disappointing to see national-level issues directly affect the local election.
He and all other executives of the chapter will resign to take responsibility. (Jiji Press)