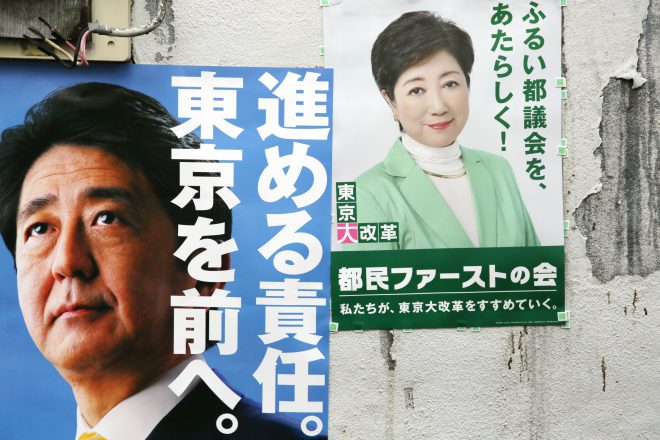 Tokyo- The historic defeat suffered by Japanese Prime Minister Shinzo Abe's Liberal Democratic Party in Sunday's Tokyo metropolitan assembly election casts uncertainty over his handling of the government and the course of national politics.
While Abe is expected to try to turn around the situation by reshuffling his cabinet and the LDP's leadership team, possibly in early August, he may find it difficult to maintain power if frustration over his long-running reign becomes widespread within the party.
"An extremely severe verdict has been handed down," Abe told reporters on Monday. "We have to accept the outcome as a reprimand to the LDP and reflect deeply on it."
In the 127-seat Tokyo assembly, the LDP scored a record low of 23 seats, while Tomin First no Kai (Tokyoites first group), a regional party led by Tokyo Governor Yuriko Koike, and forces supporting the governor, including Komeito, secured a total of 79 seats, far more than a simple majority.
"I believe there was a harsh criticism that my administration may be getting slack," Abe said.
Stressing the need for the LDP to return to its objectives when it took back the reins of government in 2012, he said, "We must brace our nerves and move forward humbly and carefully."
Throughout the campaign for the Tokyo election, the LDP was on the defensive due to a favoritism scandal involving Kake Educational Institution, headed by a personal friend of Abe, and controversial remarks by Defense Minister Tomomi Inada that raised suspicion she might be trying to use the Self-Defense Forces for the LDP's political advantage.
Hakubun Shimomura, executive acting secretary-general of the LDP, decided to resign as head of the party's Tokyo chapter to take responsibility for the historic election defeat.
Political watchers say pent-up frustration over Abe that has been simmering within the LDP may erupt, affecting his plans to revise the constitution by adding a provision to war-renouncing Article 9 to give a rationale for the existence of SDF troops.
Abe is eager for the LDP to submit its constitutional amendment proposals to parliament by the end of this year, aiming for the revised constitution to come into force in 2020. There is speculation that he may be considering holding a national referendum on constitutional amendments on the same day as the next election of the House of Representatives, the powerful lower chamber of parliament, whose members' terms expire in December 2018.
The timetable is based on the premise that Abe is elected to a third three-year term as LDP president in autumn next year. It may be disrupted if former regional revitalization minister Shigeru Ishiba and others who have raised objections to Abe's position on the constitution gain strength within the ruling party.
There is also concern within the LDP that Tokyo Governor Koike may capitalize on Tomin First's impressive showing in the metropolitan assembly election and lead the party to national politics. (Jiji Press)