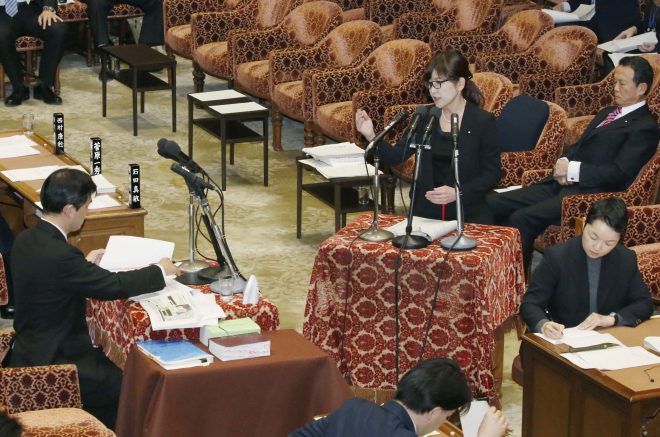 TOKYO- A Japanese main opposition lawmaker on Thursday requested Defense Minister Tomomi Inada to resign, accusing her of making insincere remarks on Ground Self-Defense Force reports on its activities in South Sudan.
At a House of Representatives Budget Committee meeting, Democratic Party lawmaker Yuichi Goto demanded her resignation and intensive debates on the GSDF reports at the lower chamber panel.
The party also seeks the resignation of Justice Minister Katsutoshi Kaneda, who has been under fire for his alleged interference in parliament over a planned bill to penalize criminal conspiracies.
The Defense Ministry at first said the daily activity reports by the GSDF troops participating in the U.N. peacekeeping mission in the African country had been discarded. But the ministry now says it has found that the reports are kept in electronic form.
The ministry found the data on Dec. 26 last year and reported the discovery to Inada on Jan. 27 this year, according to the defense minister.
Goto argued that the ministry concealed information for more than one month. But Inada said it took time to check facts in the reports and designate sections that need to be kept undisclosed.
GSDF reports written in July last year refer to “combats” in Juba, raising concern that the situation in the South Sudanese capital may have required the GSDF troops to be withdrawn under the five principles for Japan’s participation in U.N. peacekeeping missions.
Playing down such concern, Inada told the same Lower House committee Wednesday that the combats mentioned in the reports are different from what are legally defined as combat actions.
She also said she uses the word “armed clash” to describe such a situation when speaking before parliament, because the word “combat” would be problematic under the war-renouncing Article 9 of the constitution.
On Thursday, Inada did not refer to the constitution. But she said she does not use confusing words.
Social Democratic Party head Tadatomo Yoshida told a news conference that Inada should resign, while Chief Cabinet Secretary Yoshihide Suga said she does not need to step down. (Jiji Press)