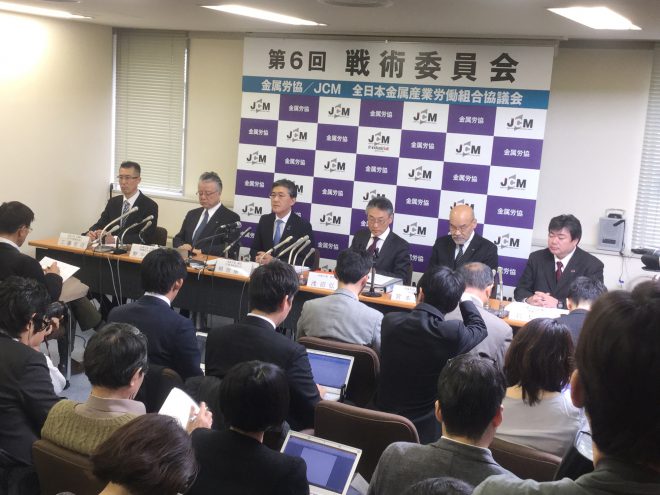 TOKYO- Many major Japanese companies, including automakers and electronics makers, on Wednesday proposed raising their pay scales for the fourth straight year, but the hikes will be the smallest in the four years.
“The fourth straight year of base wage hikes will support Japan’s exit from deflation and economic recovery,” Yasunobu Aihara, president of the Japan Council of Metalworkers’ Unions (JCM) and president of the Confederation of Japan Automobile Workers’ Unions, said at a press conference.
But this year’s “shunto” wage negotiations between labor and management suggested that the Japanese government’s campaign to press businesses to increase wages, which started in 2014, has been losing steam further, analysts said.
Major companies the same day presented their wage plans in response to requests by their labor unions in the negotiations.
Many large firms proposed keeping pay scale increases smaller than the previous year’s levels for the second consecutive year although the government has called on businesses to grant base wage hikes at least on par with last year’s figures to help spur economic growth.
One factor behind the lower proposed hikes is the yen’s strengthening, which has led to earnings deterioration at a number of companies, mainly manufacturers.
The focus now will be whether midsize and small companies will propose pay scale increases and how large the possible hikes will be.
Among automakers, Nissan Motor Co. offered to raise its pay scale by 1,500 yen per month, down from 3,000 yen agreed between the labor and management sides in the previous year’s shunto negotiations.
Industry leader Toyota Motor Corp. lowered its pay scale hike to 1,300 yen from 1,500 yen, but proposed increasing family allowances by 1,100 yen.
Meanwhile, Honda Motor Co. proposed a base wage hike of 1,600 yen, up from 1,100 yen.
Nissan said that it will pay annual bonuses equivalent to 6.0 months’ salary, Honda 5.9 months and Toyota 6.3 months, all fully meeting the labor side’s requests. The figures for Honda and Nissan are up from last year’s agreed levels of 5.9 months and 5.8 months, respectively, while that for Toyota is down from 7.1 months.
Major electronics makers Panasonic Corp., NEC Corp., Fujitsu Ltd. , Hitachi Ltd. and Mitsubishi Electric Corp. each proposed carrying out a pay scale increase of 1,000 yen, against 1,500 yen agreed last year.
Mitsubishi Heavy Industries Ltd. offered to trim its pay scale hike to 1,000 yen from 1,500 yen.
In the shunto negotiations, the labor unions of the major automakers and electronic makers had demanded pay scale hikes of 3,000 yen, the same amount they sought last year.
But the firms are reluctant to grant pay scale hikes larger than last year’s levels that would lead to heavier personnel costs, at a time when economic uncertainties are growing following the launch of US President Donald Trump’s administration. (Jiji Press)