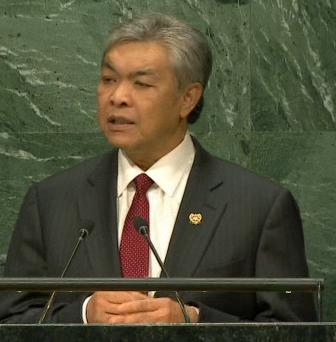 KUALA LUMPUR- Malaysian Deputy Prime Minister Ahmad Zahid Hamidi said on Thursday that the man from DPRK (Democratic People’s Republic of Korea) that died in Malaysia was Kim Jong Nam.
Malaysian police earlier identified the man as Kim Chol, according to his passport, but Zahid said the man was indeed Kim Jong Nam.
During a press conference on Thursday, when asked if the man was confirmed to be Kim Jong Nam, the half-brother of the DPRK leader Kim Jong Un, Zahid relied, “yes, certainly yes.”
He said he was briefed by the police that the DPRK embassy had confirmed Kim’s identity.
Malaysian authorities would only release the body after the postmortem is completed, said the official.
Malaysian police said earlier that the 46-year-old man was holding a DPRK passport under the name Kim Chol. His body was taken to a hospital in Kuala Lumpur Wednesday for post mortem to ascertain the cause of his death.
The results of the post mortem are yet to be released.
Two female suspects who were captured by the surveillance camera at the airport had been arrested, police said. The two women hold Vietnamese and Indonesian passport respectively.
The Malaysian boyfriend of one of the suspects was also arrested, police said.  (Xinhua News)