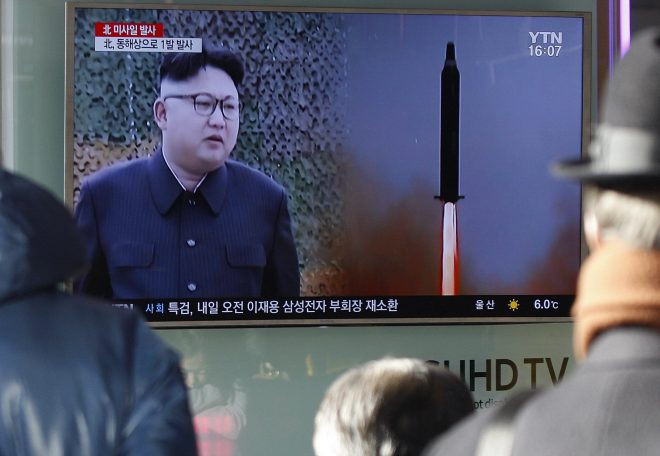 Seoul - North Korea fired a ballistic missile into the Sea of Japan from the northwestern province of North Pyongan Sunday morning, South Korea’s Joint Chiefs of Staff and other sources said. The missile flew some 500 kilometers after being launched at around 7:55 a.m. (10:55 p.m. Saturday GMT), they said. It was the Nodong missile with a range of some 1,300 kilometers and may have traveled on a lofted trajectory, a Japanese Defense Ministry official said in Tokyo. The South Korean military is determining if it was a modified version of the Musudan missile with a range of 2,500 kilometers to 4,000 kilometers, South Korean media said. This marks the first ballistic missile launch by North Korea since the inauguration of US President Donald Trump on Jan. 20.In a joint press briefing with Trump in Palm Beach, Florida, Japanese Prime Minister Shinzo Abe said the missile launch is “absolutely intolerable” and called on North Korea to fully comply with relevant U.N. Security Council resolutions. Trump said, “I just want everybody to understand and fully know that the United States of America stands behind Japan, its great ally, 100 percent.” Japan lodged a protest with North Korea over the missile launch, Japanese Chief Cabinet Secretary Yoshihide Suga told a press conference in Tokyo. Given that the missile was fired immediately after a Japan-US summit meeting, it was clearly an act of provocation against Japan and the region, Suga said. Abe and Trump are spending their weekend together at the president’s Palm Beach estate following their White House summit on Friday. There have been no reports of damage to ships or aircraft from the missile, Suga said. (Jiji Press)