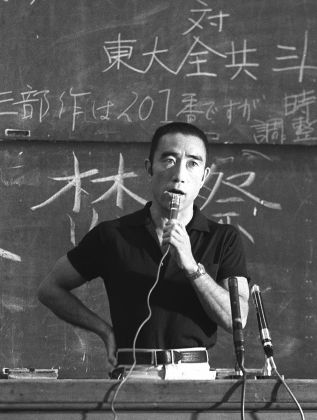 TOKYO- An unreleased voice recording of Yukio Mishima has been found at a Tokyo broadcaster in which the late novelist talked about death and Japan's pacifist Constitution nine months before his sensational suicide, the company said Thursday.
The roughly 80-minute-long recording of Mishima speaking with British translator John Bester in Japanese, believed to be taped on Feb. 19, 1970, was kept at Tokyo Broadcasting System Holdings Inc. and originally intended not to be made public, it said.
"I feel death has entered my body from the outside," Mishima tells Bester in the talk session.
He also called Japan's Constitution, which has a war-renouncing article, "hypocrisy," and said, "The Constitution is telling Japanese people to die."
About his own literature Mishima said, "I tend to smear my pieces all over with something. It's like oil painting. I don't like typical Japanese painting with white space." Mishima also said, "I can only express my thoughts through my style of writing," according to the company.
Mishima, a Nobel literature prize nominee from 1963 to 1965 known for his works including "Shiosai" (The Sound of Waves) and "Kinkakuji" (The Temple of the Golden Pavilion), committed suicide by "harakiri" disembowelment after failing in his attempt to stage a coup at a Ground Self-Defense Force post in Tokyo's Shinjuku Ward in November 1970 at the age of 45.
The broadcaster found the tape about three years ago and decided to release it after an investigation into why the tape was banned from being broadcasted ended fruitless, it said. TBS will broadcast the tape Thursday night. (Kyodo News)