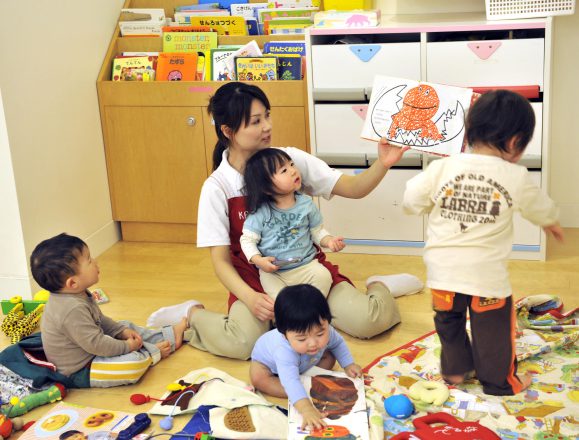 Nurseries set up by companies rising

Tokyo- Nurseries set up by companies have increased in Japan, showing a major presence in nationwide efforts to eliminate the shortage of such facilities.
As of March 30, 871 nurseries with a combined capacity of some 20,000 children had been judged eligible for subsidies for such company-run nurseries.
The sum compares with the government target of securing nurseries for 50,000 children across Japan by the end of March 2018 to help lower the number of children on nursery waiting lists to zero.
Japan started a system in April last year that allows companies to establish nurseries for employees and local residents inside or near their establishments upon registration with local prefectural governments.
The company-run nurseries are eligible for state subsidies. The amounts of subsidies to cover the construction and operation costs are almost the same as those for traditional authorized child care facilities that satisfy state standards.
Such nurseries can flexibly adjust their services, including the business hours, depending on the work styles of employees, such as those who work on night shifts and holidays.
In December last year, software developer Works Applications Co. opened a nursery, called WithKids, in its head office in Tokyo's Minato Ward to accept preschool children. At present, the facility provides care to around 10 children of employees.
WithKids offers meals designed by dieticians for parents and children to eat together, a service the nursery launched based on ideas put forward by employees.
"One female employee says she was able to return to work quickly (after giving birth), and another is glad that she can balance work and child care well," said Yuka Taniguchi, who was involved in the establishment of the nursery. (Jiji Press)