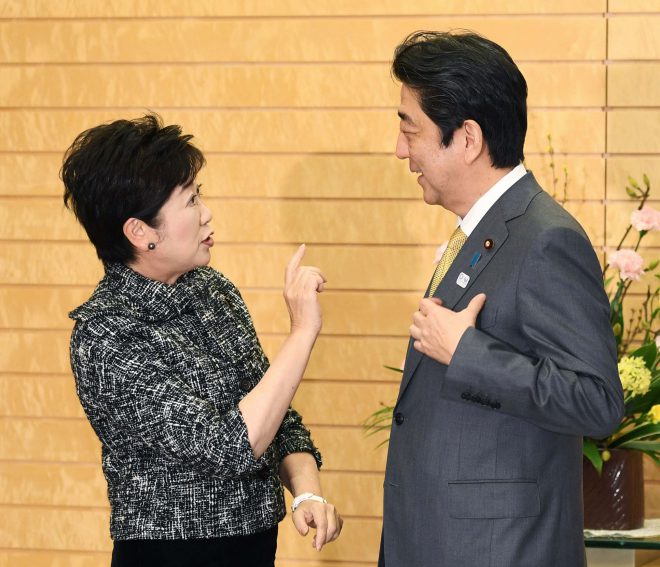 TOKYO- Prime Minister Shinzo Abe and Tokyo Gov. Yuriko Koike will likely discuss how to share the financial burden for the 2020 Tokyo Games after the prime minister's office announced the pair will hold talks next Tuesday. Toshiro Muto, chief executive officer of the 2020 organizing committee, also said Friday a meeting is scheduled later this month at which committee head Yoshiro Mori, Koike and Olympic minister Tamayo Marukawa will discuss the matter. The organizing committee last month presented its first draft of the total games cost -- set between 1.6 trillion yen to 1.8 trillion yen (about $13.8 billion to $15.5) -- at the four-party cost review panel involving the International Olympic Committee, the organizers and the national and metropolitan governments. The main issue hanging in the air is how to divide the cost for temporary facilities, all of which at the time of the bidding process were to be shouldered by the organizers. Of the 28 billion yen required, the organizers are proposing the national and metropolitan governments as well as municipalities where events will be held to incur 20 billion yen in total. But the idea is likely to be met by objections from the municipalities, especially those outside of Tokyo. "We need to kick off with a summit talk in order to reach an agreement as early as possible," said Muto, stating that it would be best if things could be agreed upon before the end of the current fiscal year in March. (Kyodo News)