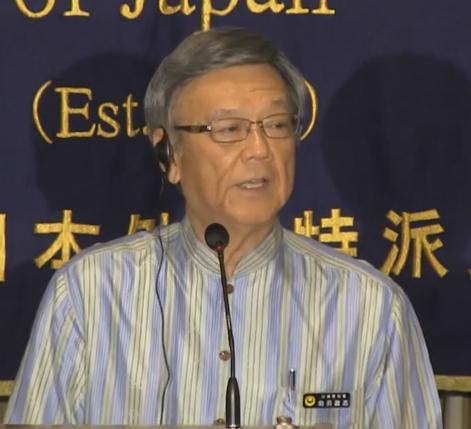 Onaga hopes Trump will move Futenma base out of Japan

WASHINGTON- Governor Takeshi Onaga on Thursday expressed hopes that the administration of US President Donald Trump will move the Marine Corps’ Futenma base out of Japan or his southern prefecture. Onaga is a staunch opponent of a Japan-US agreement to transfer the Futenma base in Okinawa’s Ginowan to the Henoko coastal area in Nago in the same prefecture. “As changes are expected to occur under the Trump administration, I want changes for a good direction,” Onaga said in a speech in Washington. He said he will use all authorities given to him to block the plan to build a new military base in Henoko. Onaga also said he introduced himself to US Secretary of State Rex Tillerson at the National Prayer Breakfast held earlier on Thursday. The governor had no time to exchange opinions with Tillerson at the time, according to Japanese opposition lawmaker Yukihisa Fujita, who participated in the annual event with Onaga. The event was joined by over 3,000 people, including Trump. (Jiji Press)