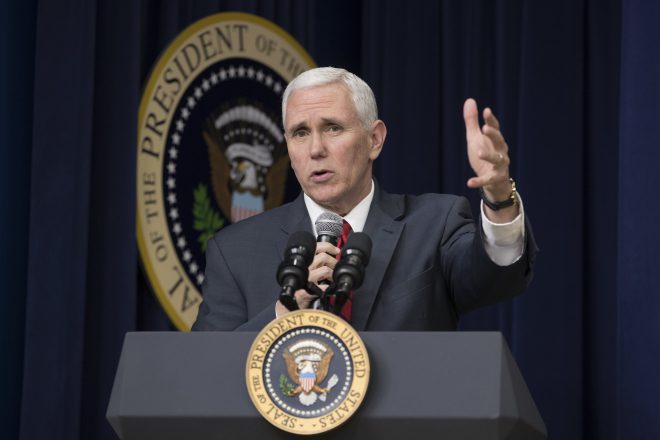 Pence to visit Japan from Tues. for economic dialogue with Aso

WASHINGTON- US Vice President Mike Pence will visit Japan from Tuesday to attend the first meeting the same day of a bilateral economic dialogue led by him and Japanese Deputy Prime Minister and Finance Minister Taro Aso. Pence will also meet with Japanese Prime Minister Shinzo Abe for talks chiefly on North Korea issues, sources familiar with the matter said. The Japan visit is part of Pence's 10-day tour that will also take him to South Korea, Indonesia and Australia. Through the tour, Pence plans to explain the United States' policy of continuing to engage in the Asia-Pacific region after its exit from the Trans-Pacific Partnership multilateral free trade agreement and to strengthen its alliances with the four countries, according to US government officials. In Tokyo, Pence and Japanese officials are expected to reaffirm the US -Japan goal of strengthening bilateral cooperation in the economic and regional security fields, a spokesman for him said. As US President Donald Trump is putting priority on tackling unfair trade practices and currency imbalances, and promoting bilateral trade pacts, a focal point is whether Commerce Secretary Wilbur Ross, who will accompany Pence, will refer to these issues, sources said. On Wednesday, Pence is set to deliver a speech before US  troops and Japanese Self-Defense Forces personnel on the nuclear-powered aircraft carrier USS Ronald Reagan, which is based in Yokosuka, Kanagawa Prefecture, south of Tokyo. He will also deliver a speech at an economic meeting in Tokyo. Pence, a lawyer and known as a conservative politician, is well versed in Japan affairs. After serving as a House of Representatives member for 12 years, Pence in 2013 became governor of Indiana, where many Japanese companies, including Toyota Motor Corp. and Honda Motor Co. have footholds. He visited Japan multiple times during his tenure as head of the US state. Pence well understands Japanese firms' investment in the United States, according to a Japanese government official. Soon after Trump criticized Toyota's investment outside the United States in January, Akio Toyoda, president of the leading Japanese automaker, met with Pence in an effort to sort out the situation. (Jiji Press)