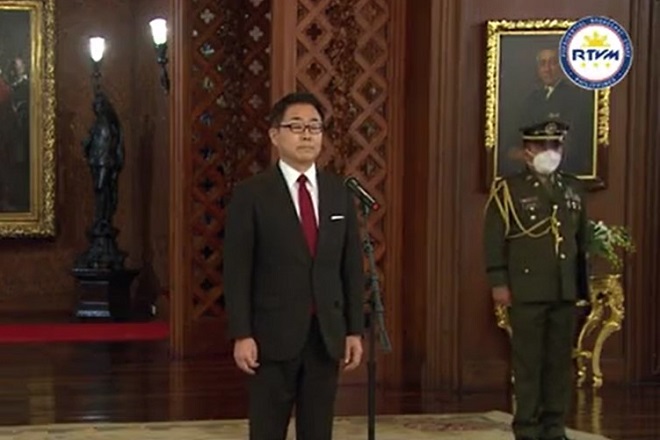 The Philippines and Japan have reaffirmed their commitment to further build on their strong economic partnership, which includes plans to expand Japanese investments in the country following favorable developments on a Philippine tax reform measure that aims to significantly lower the corporate income tax (CIT) rate.

Newly-designated Japan Ambassador to the Philippines Koshikawa Kazuhiko said during a recent courtesy call on Finance Secretary Carlos Dominguez III that Japanese companies are exploring ways of realigning their supply chains to other countries like the Philippines.

Koshikawa said the approval by the Senate of the Corporate Recovery and Tax Incentives for Enterprises (CREATE) bill, earlier passed by the House of Representatives, was welcomed by Japanese investors doing business in the Philippines, as it will soon end the unpredictability on the future tax and incentives scheme of the country.

The Senate measure aims to lower the CIT for micro, small, and medium enterprises  (MSMEs) with a net taxable income of P5 million and below to 20 percent, while other companies, including foreign firms, will pay a harmonized rate of 25 percent.

The current CIT, which is the region's highest, is 30 percent.

Koshikawa congratulated Dominguez on the Senate passage of the CREATE bill and expressed the hope that Congress would give its final nod to the measure so that President Rodrigo Duterte could soon sign it into law.

When the Congress resumes session next year after its yearend break, a bicameral conference committee composed of representatives from both chambers will hammer out a consolidated version of the CREATE bill for submission to Duterte for his approval.

Dominguez informed Koshikawa that aside from the CIT rate cut, CREATE will also allow the government to tailor fit incentives given to businesses so as to attract the kind of investors that it wants to invest in the Philippines.

During the meeting, Koshikawa also commended the Philippine economic team led by Dominguez for its sound fiscal management of the economy amid the COVID-19 pandemic.

He also restated Japan’s continuing support for the Philippine government’s efforts to curb the spread of the virus and recover from the economic repercussions of the crisis.

Citing the signing in September between the two countries of the 50-billion yen Post-Disaster Standby Loan (PDSL) Phase 2, Koshikawa reaffirmed Japan’s commitment to continue assisting the Philippines in its disaster risk reduction and mitigation programs.

In response, Dominguez said the Philippines has looked to Japan as a good example of how to curb the spread of COVID-19.

He again thanked Japan for responding swiftly to the government’s call for emergency financing to help mitigate the impact of the pandemic on the economy and the Filipino people.

Dominguez also thanked Japan for its support to the Philippines’ development agenda under the Duterte administration, citing its status as the country’s no.1 official development assistance (ODA) partner, with loans and grants amounting to around US$10.10 billion (38.53 percent of total ODA) as of June 2020.

Since the start of the Duterte administration in July 2016, fifteen loan agreements totaling 679.296 billion yen (about P313.147 billion or  US$6.443 billion) have been signed by Manila with Tokyo.

During the meeting, Koshikawa likewise congratulated the Philippines on its recent successful issuance of $2.75 billion global bonds, which included the Japan-based Daiwa Capital Markets as among the joint bookrunners of the offering.

Koshikawa also reiterated Japan’s long-term support for the economic development of, and the peace process in, Mindanao.

During the meeting, Dominguez briefed Koshikawa on the progress of the implementation of the Bangsamoro Organic Law (BOL) and the strides made by the National Government-Bangsamoro Government Intergovernmental Relations Body (IGRB).

Before beginning his tour of duty in Manila,  Koshikawa was a senior official at the Japan International Cooperation Agency (JICA), and had served as Japan’s Ambassador to Spain and Angola.

Koshikawa presented his credentials to President Duterte as Ambassador Extraordinary and Plenipotentiary of Japan to the Republic of the Philippines last December 14.

According to the ambassador, his first official activity after presenting his credentials was his courtesy call on Dominguez.