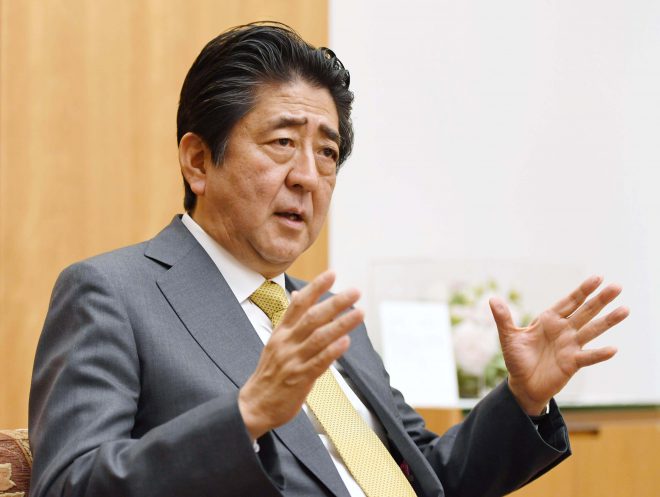 TOKYO - Prime Minister Shinzo Abe urged South Korea to remove a new statue dedicated to women forced to work in Japan's wartime brothels, as he called on Seoul to implement a bilateral agreement reached in 2015 which aimed to settle the thorny issue. "The South Korean side should show its sincerity," the premier said on a TV program Sunday, referring to the statue installed late last month outside the Japanese consulate in the South Korean city of Busan. The statue is one of a number in South Korea representing "comfort women" procured for the Japanese military's wartime brothels before and during World War II. The latest statue erection came despite the bilateral agreement in December 2015 aimed at fully settling the issue. Abe said during the NHK TV program recorded Friday that South Korea should carry out the agreement irrespective of leadership changes, as this is "a matter of credibility." The statue issue arose amid political turmoil in South Korea. The parliament impeached President Park Geun Hye last month following a political scandal and her powers have been transferred to acting president and Prime Minister Hwang Kyo Ahn. In the pact, South Korea said it will strive to solve the issue of a statue which stands in front of the Japanese embassy in Seoul "in an appropriate manner." Japan has transferred 1 billion yen ($8.5 million) to care for the surviving victims and their families as part of the deal. Abe said South Korea should make efforts to remove the statue in Seoul. The Japanese prime minister also said he will call on U.S. President-elect Donald Trump to reduce the burden that Okinawa Prefecture bears in hosting the bulk of U.S. military facilities in Japan, when he meets the incoming American president. "I would like to communicate to him the fact that (the alliance) contributes to the peace and stability in the Asia-Pacific region, and brings substantial benefits to the U.S. economy," said Abe. Trump pledged in his election campaign to make American allies shoulder more costs related to hosting U.S. military forces abroad. Local protests in Okinawa against U.S. military bases there increased recently after the crash-landing of an Osprey aircraft in nearby waters. Sources familiar with bilateral relations have said Abe and Trump are arranging a meeting in the United States in late January, shortly after Trump's inauguration. In November, Abe was the first world leader to meet face-to-face with Trump following his victory over Hillary Clinton. The Japanese leader also indicated his intention to relay to Trump the importance of the Trans-Pacific Partnership pact, a U.S.-led free trade agreement, which it has reached with Japan and 10 other countries, but the incoming president seeks to withdraw from. Abe said the planned negotiations over future economic cooperation with Russia on Russian-held, Japanese-claimed islands will "without doubt" be progress toward signing a post-World War II peace treaty. The two leaders agreed in their summit in Japan in December on joint economic activities on the contested islands, known as the Northern Territories in Japan and the Southern Kurils in Russia. The prime minister also vowed to withdraw Japan's Ground Self-Defense Force personnel deployed to South Sudan as U.N. peacekeepers "without hesitation" if the situation there worsens and makes it difficult for the troops to safely fulfill their mission. (Kyodo News)